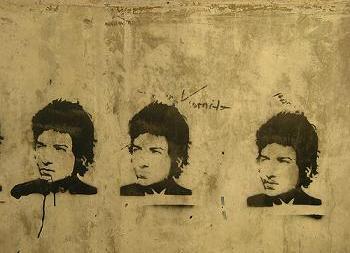 That's right, Bob Dylan is looking away from this post.

Enough! Bob Dylan has just tossed the final straw onto my music library’s back. For years now, I’ve been discovering that, rather than created by the act I knew as its author, song after song had been spawned by Bob Dylan years before I was born. In quiet, desperate disbelief I’ve been listening to Bob Dylan dismantle my musical reality.

What happened? For sentimental reasons I bought the Siouxsie and the Banshees’ compilation Twice Upon a Time/The Singles, where I was delighted to hear “This Wheel’s on Fire”, the title song from the wacky British comedy show “Absolutely Fabulous”. It made perfect sense for Siouxsie the Brit to author the song. Then, months later, I learned “Wheels” was actually Bob’s, and the neat song order crumbled.

This crushing blow is but the latest in a series. The seemingly short list encompasses a lifetime, obliterated by Bob Dylan’s giant presence:

Siouxsie and the Banshees, “This Wheel’s on Fire”, on Twice Upon a Time/The Singles

As if this wasn’t enough, Bob Dylan stalks through references in many other songs. His shadow haunts me more than “Sad Keanu”, “Nope Just Chuck Testa”, and“They See Me Rollin'” combined.

There’s more at the Neverending Pool and the Barf List (ha!), but luckily, my music library has limits.

Oh, sweet ignorance. All of these songs—and no doubt many future ones—would have been just fine, and I with them. Now all I’ll think about when they come on shuffle or the radio is Bob. The bands themselves have been tainted.

It hurts and it’s personal. Bob Dylan is making me think everything’s a remake: I now doubt the originality of every song, wondering who its real author is. I look over my ear, half-expecting to see Bob. This is no way to listen to music; this is no way to live.

Where will this end? What begins where Bob Dylan ends? Does he even end anywhere? What song has Bob Dylan ruined for you?