Fall seems to be the season for heritage festivals. Over the past three weekends here in Portland, Oregon, Serbian, Polish, and Greek festivals took place. I had a chance to attend the Polish and Greek one. Today’s first of two posts looks at the festival experiences (Part Two next week will tackle heritage festivals in general).

I learned about Serbian Fest 2011 the week after it took place from Vickie Kavanagh’s preview article on OregonLive.com. Excerpt:

Traditional music, entertainment, activities and food will be featured at a Serbian Festival at St. Stephen’s Serbian Orthodox Church.

Dance music will be provided by Krebsic Orkestar, a Balkan gypsy brass orchestra made up of Oregon Symphony, Portland Opera and jazz band members.

“We started this event because not enough people know where Serbia is and what the culture is,” said event organizer Jennifer Zelen. “The Serbs have a long history of music and food and really great folk dances.”

Even though I couldn’t attend Serbian Fest, I enjoyed its poster: 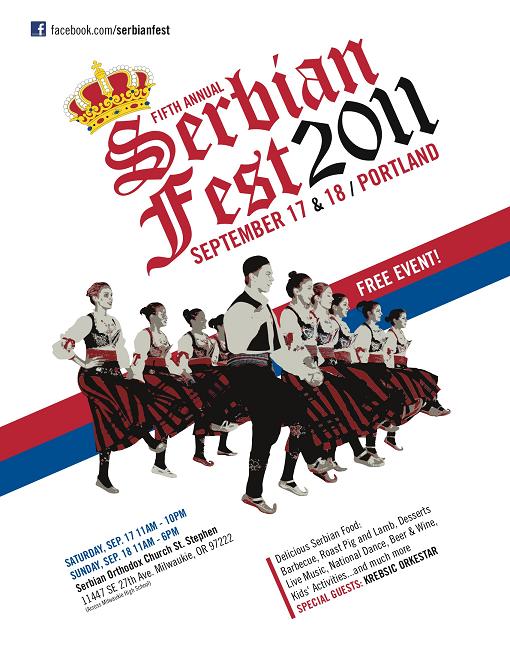 Poster for the 5th annual Serbian Fest in Milwaukie, Oregon

I deliberately chose Sunday to go to “West Coast’s largest Polish Festival” because the weather forecast said rain; it was the best way to attend without the crowds (10,000 people had attended last year). The set up was the same it had been when my wife Lindsay and I attended a few years prior: food tents on the street between Polish Hall and the Church Hall, a stage in the parking lot opposite booths featuring ethnic wares. Lindsay joined me at this year’s Festival again. We headed straight for the tokens table and then split up to get food.

Even if it rained off and on throughout the morning, the crowd avoidance strategy paid off: my wait for placki ziemniaczane (potato pancakes, with sour cream or apple sauce), at the food stand took about 4 minutes, a vast improvement over Mile 73 Heather’s 30+ in 2009. Lindsay’s wait for golabki (cabbage rolls with meat and rice topped with tomato sauce) at the food court was even shorter. Only I and one senior ahead of me comprised the line in the beer garden.

Two minutes after we dove in, a downpour nudged us closer together with fellow festival goers while we praised the food and grumbled at the rain. When the sun came out again, we walked around the merchandise booths to the tune of a rain-shy polka band, and, at the end, we popped in the European Café to enjoy a hearty cheesecake while kids played classical piano.

As tasty as the food was, my highlight was the ?ywiec lager we had with the food. It was the experience that counted. As a Slovak who has considered beer a food category since the age of 5 and as a lager snob, I can’t say a $6 ?ywiec impressed me for its qualities as beer. But since I can count on one hand the number of times I had any Polish beer in Europe, the ?ywiec pint in North Portland felt special. All the more so as we concluded the Polish-themed outing with Northwest ales at the nearby Black Cat Cafe, where we sat under a vintage wall-sized, framed glass ad proclaiming “Pilsner Urquell. Made in Czechoslovakia since 1292”. 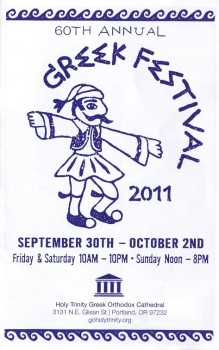 Having much less affinity to Greece—compare a country and a cuisine bordering on Slovakia’s with 800 miles to reach the Aegean—I decided to check out the Greek Festival at Holy Trinity Greek Orthodox Greek Cathedral only to see what a different heritage’s heritage fest would look like. The preview promised a very similar experience to the Polish Festival, except in a blue-and-white Mediterranean flavor instead of the white-and-red Central European one. On the festival’s last day, I wasn’t disappointed.

The tyropita (cheese-egg mixture in buttered phyllo) offered a worthy substitute to the spanikopita the stand had run out of by 4 pm. The kataifi (angel hair of phyllo wrapped around nuts and spices and soaked in honey sirup) was to die for as the speakers blared a Eurotechno version of Zorbas.

My favorite part of the hour I spent at the Greek Festival—it was a busy Sunday!—was the Hellenic-American Cultural Center and Museum of Oregon and SW Washington that I discovered next to the Cathedral. In fact, I plan to answer the call of Slovak lands’ and my family’s deep history and revisit the “The Year in Byzantium” exhibit before it closes in December.

The fall heritage festival season is far from over. Two weeks separate me from the tiny Edelweiss Festival at Mountain View Orchards in Hood River Valley, Oregon. Sauerkraut, apple cider and yodeling in the shadow of Mt. Hood anyone?