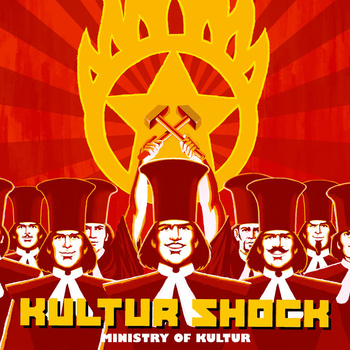 The cover of Kultur Shock’s 2011 release, Ministry of Kultur

Though Seattle-based Kultur Shock is one of my favorite transplant bands, I only learned about their latest, February release Ministry of Kultur while doing research for American Robotnik. Having not listened to their music for a while, I decided to judge the band’s fifth studio album (7th overall) in the context of their entire production: to get a real sense of where Kultur Shock stand today, I listened to all their studio albums in chronological order. The experience reminded me of my early trail runs as well as of my acculturation journey toward integration.

The band’s debut studio release, Fucc the INS, storms out of the gate in 2001 in a ferocious deluge of raw energy, as if announcing to the world, ‘We were rearing to go, we’re finally here, and we mean business!’ The album establishes a baseline for Kultur Shock’s idiosyncratic style: mixing genres—punk rock, reggae, metal, Balkan brass, and Gypsy tunes all make an appearance—throughout the original tracks and remakes of traditional tunes; alternating furious attacks of speed with recharging in brief lulls; singing in Bosnian, with some Romany and minimal English. Then the final number, “Backdoor Boyz” sets the pace for the sequel: “Everybody rock your body.”

The sophomore effort, Kultura Diktatura, from 2004, sees Kultur Shock find their stride, resuming where they left off. With a gentler start; smoother metal melodies with broader stylistic and geographic horizons, including Latin, Middle-Eastern, and dance; and more playful lyrics and original material, Kultur Shock enters their zone. Closing the loop, “Too Late to Fornicate” again offers a thematic preview of the next album:

I know how to say words like “fuck” and “okay”
In my broken English way
And I know that it’s sad, it’s pathetic, and it’s bad
That I can’t communicate

Getting in the Zone: We Came to Take Your Jobs Away

After getting the excitement out of their system, by 2006 Kultur Shock gets more serious on We Came to Take Your Jobs Away. Cultural commentary from an immigrant’s standpoint dominates the album; where the previous releases spoke to fellow diasporans, from the album title and cover to the increased use of English to the lyrics themselves, this one addresses Americans, as in “God Is Busy, May I Help You”.

I know, I’m stranger in your land,
I know, ladies and gentlemen,
I know, I am coming here to stay,
And take your jobs away.

The band’s musical landscape continues to undulate, adding ska and especially tango to the stylistic mix. And though the album holds well together with the acceptance that it’s impossible to return, in songs like “Sarajevo” yearning for home breaks through in the end.

Hanging in There: Integration

With Integration, in 2009 Kultur Shock reach the zone they want to occupy. Why change anything it if it works? The going gets even more serious: a brief detour to country music is the pinnacle of stylistic adventurousness. But even though Kultur Shock slow down a bit here, as if recognizing they need to conserve their energy for the long haul, the verbal rocks still fly off their boots. In “Build a Wall” the target are the limits of the American acceptance of foreigners and foreignness:

Mexicans are everyday feeding, building USA
But when they’re done, kick them out all
Build a wall, build a wall!

And in “Guerrilla”, Kultur Shock also touch the bottom of the American immigration experience:

You need to integrate too
So they can tolerate you

Digging Down: Ministry of Kultur

Finally, this year’s Ministry of Kultur contains all the elements from previous albums, but they resonate with an air of light-headedness that comes with reaching the depths of endurance. By now they’ve seen it all, musically, geographically, and live-in-concert, and the maturity shows. They no longer smoke grass (“Horse Thief”) or hashish (“Hashishi” on We Came to Take Your Jobs Away, five long years ago), they “self-medicate with chocolate” (“Choko Ko Ko”); they no longer walk the planet Earth (“How to Fucc Songs & Irritate Musicians”), they live in the “city of pain” (“House of Labor”); and instead of nostalgia for the home town (“Sarajevo” on We Came to Take Your Jobs Away), what lingers for a long while after the album is over is the kernel of truth in “Don’t Shoot Me!”:

Your country’s not worth your tears