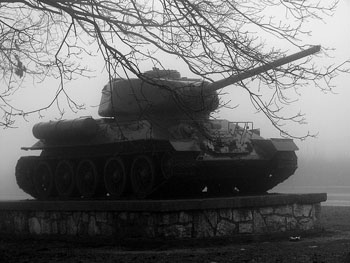 Another Thanksgiving is over and tanks won’t be haunting me for at least another year. Every year the holiday’s name makes me think of tanks, which is why I secretly call it Tanksgiving.

Tanks play a role in a Central European’s, and particularly a Slovak’s or a Czech’s, life story and imagination. If you ask any Slovak or Czech with memories of living in socialist Czechoslovakia about tanks, I guarantee he will share at least one memory about a particular tank. (Please do share your tank story in the Comments.)

‘My tanks’ have been with me since I can remember. Here they are in chronological order.

Some of my elementary school trips were to the monuments of the Red Army’s 1945 liberation of Czechoslovakia. The baddest tank was on top of Dargov hill. We’d get out of the bus and run (solemnly, always solemnly) around the monument. The boys would climb on the tank, to explore and for group shots. Everyone looks important and happy. Trips farther east took us kids to the Dukla  Pass, where two tanks frozen in action would awe us: a gray German tank wedged under a deep-green one with a red star.

Through the years, tank formations would roll across the television screen during news reports from May Day (better known then as International Workers’ Day), parades in Moscow or Prague. I wanted to drive one of them.

I finally saw a real, moving tank at the School in Nature, a three-week stay in sixth grade away from home, at a resort on the northern slope of the Low Tatras. One day, we were playing in a snow field after class when we heard a rumbling approaching from down the forest road. We gathered along the road to see what it was. A tank with Czechoslovak Army’s insignia rattled past. That thing was huge. I remember imagining what someone’s head would look like if the tracks rolled over it. I didn’t think it would be shooting any time soon—there were no enemy threats. It just rolled by and we never spoke of it. Later I learned the road led to a heavy military machinery shooting range.

After the Velvet Revolution, photos and documentary footage emerged into the finally-free media of Soviet and other ‘friendly’ armies’ tanks invasion of the streets of Prague, Bratislava, other cities, the entire country. My compatriots weren’t happy. Some probably suspected the occupation would last for a while. My mother, who’d lived in my hometown Košice at the time, told me the loud tanks had scared her.

The tanks facing off with a man carrying shopping bags during the Tienanmen Square protests become forever frozen in my memory.

In 1991, I got wind of the Monument to the Soviet Tank Crews painted pink by David Černý. His troupe attached a huge pink (middle?) finger to the turret. The installation made me understand the potential of free speech. 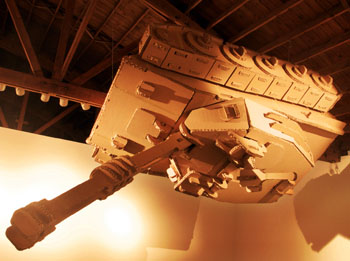 After a lengthy absence, tanks returned in the form of a 3D cardboard puzzle. Portland, Oregon-based artists Gordon Barnes and Shelby Davis assembled a life-sized model of a tank from layered cardboard pieces. Seeing it was a haunting, charged experience.

Despite common sense advising otherwise, I contemplated ways I could install the tank in my backyard following the exhibits and preserve it from the Portland rain. The tank would have taken up perhaps a third of the yard and it would have always been in sight and in the way. I don’t know where the tank is now.

Tanks of 2011: Banská Bystrica, Petr Sís, and the Pink One Again

The tanks struck within 4 months of each other.

During my summer road trip around Slovakia, Lindsay and I passed through Banská Bystrica. I’d remembered the town from a school trip whose destination was the Museum of the Slovak National Uprising. So after a night on the old town, I returned to the Museum only to realize I had completely forgotten about the outdoor tank park there. It blew me away in a true-museum way.

This November, I came across “The Wall: Growing Up Behind the Iron Curtain”

by Peter Sís, in which tanks appeared in four pictures. The book prompted me to look up the Pink Tank again, and I found out it recently returned on a pontoon in the middle of Vltava. It’s never too late to remember the newfound freedom.

Since Black Friday and Buy Nothing Day are already taken, I proclaim the Saturday after Thanksgiving “Tanksgiving”. On Tanksgiving, we share stories of our tanks. What’s yours?

Reference: Peter Sís, “The Wall: Growing Up Behind the Iron Curtain”