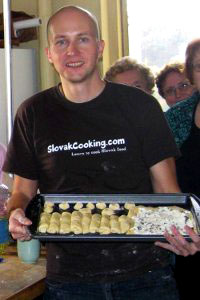 Following up on my review of SlovakCooking.com, I asked Ľuboš Brieda who runs that site a few questions about his experience as a Slovak transplant.

American Robotnik: You started SlovakCooking.com after beginning to miss the tasty Slovak home cooking in the U.S. and wanting to learn a few recipes. There’s a huge gap between learning to cook Slovak dishes and sharing the recipes on a website. What compelled you to take your craving for Slovak food  public?

Ľuboš Brieda: You make it sound as if one day I woke up and decided to become a cook and devote my life to cooking Slovak dishes. But it wasn’t quite like that. For a very long time, I’ve been keeping a personal website called IAmLubos.com. This was a place where I used to post photos from hikes, travels, and other shenanigans before Facebook became the place to do so. It slowly grew to include additional sections including one called “making stuff” that consisted of short visual summaries of various, mainly food related, projects I have attempted. As I started adding more Slovak recipes, it became obvious these recipes needed a new home. To my great surprise, the domain SlovakCooking.com was available so I grabbed it right away.

However even then I did not have a particular vision for the site. I saw it mainly as an archive of my future cooking endeavors. I knew I wanted to make the site more interactive than the IAmLubos site, which consists mainly of static content. I decided on the WordPress platform, since it was both easily customizable and also offered support for reader feedback. But although Slovak Cooking has grown dramatically since those early days, to me the site still remains mainly a diary of my activities. I think all of us end up doing a lot of great things with our lives, but if we don’t record them, we tend to forget about them and lose part of what makes us unique. I personally prefer posting information online, since to me this is the most permanent way. Pieces of paper get lost, but it’s highly unlikely that a massive server farm with multiple layers of backup will lose your data—at least as long as you keep paying your hosting fee.

Of course, posting online has the added benefit of connecting you with your readers. When I started the site, I had no idea there will be so much interest in Slovak food! As far as I know, SlovakCooking.com is the only English-language website devoted to Slovak recipes. This allows it fill a certain hole that existed here in the United States and also around the world. I often get emails from folks telling me that their only memory of their grandmother was a certain dish she used to make. The recipe was long lost and forgotten, but they were able to recreate it according to something they found on the site. This way, Slovak Cooking is helping folks reconnect with their ancestors.

American Robotnik: On your website you also say you were hoping to find out more about the culture and history of your country as well. Can you share your top three lessons from SlovakCooking.com?

Ľuboš Brieda: The main thing the site has taught me is just how large the little Slovakia is. It’s quite interesting how dishes that are completely indispensible in one part of the country may be unheard of in another. This would make more sense, if Slovakia was a country the size of the U.S. But Slovakia is a small country—you can in fact walk from one end to the other (the long way) in less than a month. 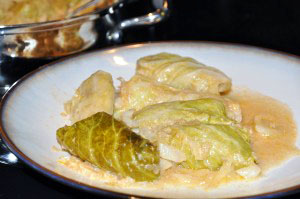 One example of this is stuffed cabbage, or holúbky. Soon after I started the site I started getting inquiries about this dish. I had absolutely no idea what people were talking about! I have never heard this word “holúbky” while living in Slovakia. Then later I attended a traditional St. Nicholas dinner held at the Slovak embassy in Washington, D.C. The dinner was supposed to include traditional Slovak dishes. But instead of goulash, kapustnica, or fried schnitzel, the highlight were these odd cabbage leaves filled with a meat mixture. This was my first and only time that I’ve been served holúbky. Even on my travels through Slovakia I have yet to find it being offered in a restaurant. It seems that this dish used to be quite popular in the eastern part of the country. This is also coincidently the region from which many of the immigrants came from; hence it makes sense that their descendents would associate traditional Slovak cooking with this particular dish.

Another example is the bryndza spread. This simple spread made of butter, onions, a bit of paprika, and the traditional Slovak cheese bryndza is enjoyed by people all around Slovakia. However, in my hometown of Banská Bystrica, we have a special name for it. We call it šmirkáš. Until I came to the US, I had thought that šmirkáš was as common a Slovak word as halušky. It was only here, while interacting with other Slovaks and getting blank stares that I concluded that this word must be specific to my hometown.

Running the site also allowed me to interact with other Slovaks and also Slovak-Americans. What I found interesting is just how proud many Slovak-Americans are of their heritage. The saying goes that the biggest patriots are the expats, and this is definitely true of Slovaks. Unfortunately, the Slovaks living in Slovakia tend to have a rather negative view of their own country. This is one aspect of the Slovak culture I don’t particularly like. I often say that the national sport of Slovakia is complaining—this is definitely true of my family. Slovakia has a lot to offer, be it the diverse scenery, the historic buildings, spas, or the great food. However, it often takes one to leave his or her own homeland to realize how majestic the place is. In this aspect the cultures of Slovakia and the United States are quite different.

American Robotnik: In learning about your country’s history and culture, you’ve surely learned something about yourself. What was it? How have your self-perception and identity shifted along the way, if at all?

Ľuboš Brieda: It’s quite hard to realize how and how much you have changed. However, the site has taught me a lot about online publishing—or blogging. It’s a really great concept. Not only it allows you to share your knowledge with others, it also allows you to learn new things from the comments left by the readers. It doesn’t matter how obscure your area of interest is. With 7 billion of people on this planet, you are sure to find an audience.

The success of this site has actually motivated me to start another blog, Particle In Cell. This site is dedicated to scientific computing and plasma physics research. I am hoping this site will revolutionize the scientific research publication process in a way similar to Wikipedia revolutionizing the reference world. Much of the scientific publishing still exists in the Stone Age. A submitted article is first sent out to some three reviewers, who ideally should be experts on the subject matter. However, often the sufficient requirement is simply having the time to review the article. After the final revision is approved, the paper is typeset and proofed, and only then it goes to print. This entire process, from submission to the paper finally making its way to the research community can take over a year. It is definitely not the most effective way to share research findings! In addition, the published paper becomes a sterile written word, since commenting is an arduous process again consisting of a formal review.

Now compare this to online publishing. You article can appear in a matter of hours or days. And instead of having just three reviewers to judge your work, you now have the entire world-wide population. But best of all, the article continues to live on thanks to instantaneous reader feedback and comments.

American Robotnik: You write, “There is a bit of Slovakia in all of us!” What bit is that? What do people who leave Slovakia take with them? What does Slovakia leave in all those who leave it? 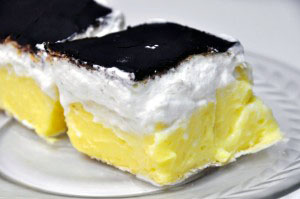 Ľuboš Brieda: Actually, my reasoning behind this statement was a bit different. To me, Slovak cooking epitomizes the old, traditional way of living that is shared among all cultures. When I think of modern cooking the images that come to my mind are gadgets, buying, and of course the various celebrity chefs more interested in their TV shows than actually cooking.

This is not what cooking should be. Instead, cooking should be about making delicious food, and at the same time connecting with the nature around us. My grandma has shown me that you don’t need any fancy gadgets to make delicious food. Her cooking equipment consists of two pots, a frying pan, a rolling pin, and an old wood burning stove in which the only way to control the temperature is by the number of logs of wood buning. Compare this to the modern kitchen, with equipment specifically dedicated to some particular task, but often doing much better job collecting dust. With the site I am hoping to show people that you don’t need fancy gear to make great tasting food. And this aspect of Slovak cooking, I believe, is shared among all cultures.

Ľuboš Brieda has been living in the United States since 1994. He is currently completing his PhD in Aerospace Engineering at the George Washington University in Washington, D.C., and also works for NASA. In 2010 he started SlovakCooking.com, a website dedicated to Slovak cuisine and traditions. His latest project is a website dedicated to plasma physics and scientific computing, ParticleInCell.com.

All images courtesy of Ľuboš and SlovakCooking.com.

7 Responses to “Cooking Slovak in America: An Interview With Lubos Brieda”