This is a reprint of a guest post I wrote for Czechmate Diary. Enjoy! 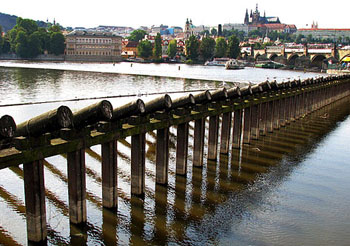 “I’ve been to Prague,” is the most frequent response I hear when I tell Americans I’m from Slovakia (“Where is that?” and “Czechoslovakia?” are close behind). Prague looms large in many people’s imagination, and every time I hear the sentence, I think of ‘my Prague’ and the layers upon layers of memories the city conjures.

I visited Prague for the first time when I was 12 1/2, with my parents in the summer of 1989. Every day of that week-long stay, I experienced the peculiar feeling you get when you see places you previously only saw on TV. Trip photos show me standing up straight, alert like a good pioneer, under the statue of my new hero King Charles IV, at the opposite end of Charles Bridge, under the entrance of the St. Vitus Cathedral, in front of the polar bear exhibit at the Zoo…

In November and December that year, Prague repaid the visit when footage of the Velvet Revolution demonstrations glued me to the TV screen. As I struggled to comprehend what was going on, I learned the names of my new heroes: Václav Havel, Alexander Dub?ek, Karel Kryl… I tried to identify the places I’d visited the previous summer as they filled with throngs that jingled keys and chanted, “Our hands are bare!”

In my Eastern Slovak hometown of Košice, Prague had traditionally played a bigger and more positive role than Slovakia’s own capital, Bratislava. Prague was our my beloved capital city; Czechoslovakia was my motherland. So when on January 1st, 1993, following the Velvet Divorce, it became the capital of a nominally foreign country, I stifled my tears (teenage boys don’t cry).

Though I didn’t get accepted to a university there, from my Bratislava dorm room Prague became closer than my hometown (thanks in large part to free or very cheap train tickets courtesy of my rail worker father). It was also much cooler than Slovakia’s capital: I went to my first big concerts there (Björk at the Palace of Culture, the Smashing Pumpkins and Oasis at the ice hockey arena); I departed from and landed there on my first trip to the U.S.; I planned to move there after graduation. Prague was the big world.

Before my final year of college, I spent a part of the summer in Budapest, where I met A., who was a Prague girl. I helped her move to a new apartment in Prague after her job ended, and shortly after she dumped me. It was for the better. By that time I’d already started interviewing for jobs and found a room in a shared apartment at Prague’s South Town projects. I spent a night there after graduation, getting to know my soon-to-be housemates. On the InterCity train back to Bratislava I received a phone call informing me I’d been accepted to Central European University. Graduate school in Budapest had been a high school dream. Prague would have to wait. 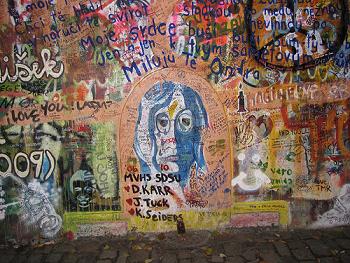 In the new millennium, Prague receded further into the distance, turning from a destination to a transfer stop on various trips (“prah” means threshold in Slovak, so maybe Praha/Prague finally came into its own).

I stopped there en route to my new home in Leiden, the Netherlands, in 2001. The following year I drank beers with a college friend on the roof of his apartment building, where we watched the red neon heart pulsate atop the castle. I was my wife‘s tour guide in 2005 when we visited for a few days on the way to Slovakia; she still talks about vep?o-knedlo-zelo (or roast pork with dumplings and sauekraut) I introduced her to at an Old Town pub.

It’s been 6 years since I last paid Prague a visit.

As much as I dislike having to bring my fellow Americans down to Earth when I say Prague is in a different country now, and has been for 18 years, and as much as the distance between Prague and me has grown, I still love her. Prague now lives in artifacts: in a bottle of Staropramen; in books like “The Wall: Growing Up Behind the Iron Curtain”; on blogs like Czechmate Diary; in movies that make it to U.S. distribution.

I see Prague when I look over my shoulder, a mirage shimmering constantly at the edge of memory, continuing to change shape as time and space shift. I miss her but I know she’ll always be there.

Reference: Petr Sís, bottle of Staropramen; in books like “The Wall: Growing Up Behind the Iron Curtain”, 2007
Image credits: –Tico– and qyphon

One Response to “Praha My Prague: A Micro-Memoir”