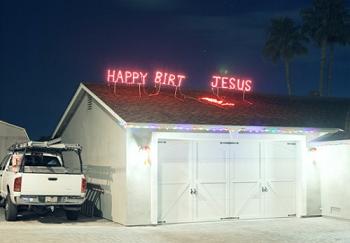 They say Christmas in the U.S. begins the day after Thanksgiving, on Black Friday. Consider, then, for a moment, the people whose devotion to Christmas extends into much of their year and whom Jesse Rieser has photographed for his series, “Christmas in America: Happy Birthday, Jesus”:

Beyond the glowing green and red lights, past the shimmering silvery tinsel, around the fragrant pine boughs, another Christmas lingers, a Christmas of contradictions. This Christmas is complex and at times, uncomfortable. It’s awkward and sometimes bleak. But it is also sincere and celebratory, colorful and creative.

This is the Christmas I capture (…) to discover and reveal what holiday magic, or mania, compels so many to devote thousands of hours to hanging lights, to carving and painting figurines, to building miniature villages, to converting their homes, yards, garages and cars into monuments to merriness.

“Christmas in America” is an unvarnished examination of the ways people mark the holiday’s meaning.

The series shows thru December 30th at the Newspace Center for Photography. I attended the post-opening artist lecture with Rieser, who walked the 20-plus-strong crowd through each photograph’s as well as the entire series’ backstories. He said he’d aimed to “show images of people who live for Christmas and for sharing their museums of merriness with their community”.

In that regard, the series succeeds. The photographs document, with no artistic filters, the way many people honor and obsess over Christmas. They’re a straight-up capture of reality as it plays out around the holiday in Phoenix, Arizona. If you’ve experienced a Christmas in the U.S. anywhere, you’ll recognize what the photographs show. Indeed, Christmas resonates with Americans not just for its meaning in the Christian calendar and hence for their religions, but also for its overtly commercial, over-the-top aspect.

What’s more, the washed-out light of winter in the desert adds a touch of desolation to the subjects’ microcosms. Though Rieser maintains the photos manifest, at least in part, the holiday’s merriness and celebration, it is the mania and artifice that emerge through all the colors and lights. Through Rieser’s lense, Christmas in America is a plastic fever dream.

As in other locations where he’d showed his photographs, Portlanders suggested places for Rieser to visit to add to his collection, including Peacock Lane, “Oregon’s only Christmas street” (I’ll post a report soon).

The Empire of Santa Clones 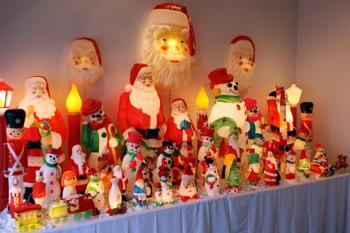 Accompanying “Christmas in America: Happy Birthday, Jesus” at Newspace is a display of Chris Willis’s personal collection of vintage holiday characters, including Santas, snowmen, reindeer, and elves, all ranging in size from 13 to 46 inches tall. According to the exhibit description, all the figures were manufactured in the late 1960’s and 1970’s by Empire Plastics Corp., a now defunct Tarboro, North Carolina-based company.

Willis says he’s drawn to the “aesthetic Empire Plastics had back then, an innocence in their expressions and comfort in their glow that current lawn decorations just don’t possess.”

Judging from the notes people wrote on the supplied cards and pasted to the wall, the figurines duly impressed every year he’s shown them.

Have a Very Merry Christmas!