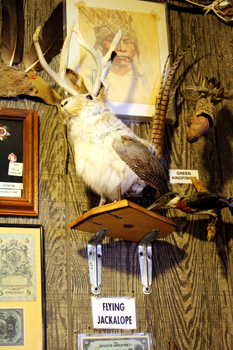 The jackalope is a mythical animal of North American folklore described as a jackrabbit with antelope horns or deer antlers and sometimes a pheasant’s tail (and often hind legs). The word “jackalope” is a portmanteau of “jackrabbit” and “antalope”, an archaic spelling of “antelope”. It is said to be a species of killer rabbit. —Wikipedia

The first time I saw a jackalope was at Marsh’s Free Museum, a Long Beach, Washington, roadside attraction, whose main attraction is Jake the Alligator Man and that also features an eight-legged lamb and a two-headed calf. The oddity store actually features two jackalopes: the Wyoming jackalope mounted on a shield and a taxidermied flying jackalope. Inasmuch reality is what’s in our heads, the animal is for real.

Though by the simple virtue of a short history, the jackalope lore is just as shallow as all of American folklore, jackalopes have captured many people’s imagination: witness the dedicated Flickr group Jackalopes Rule! The combining of elements to form a unique entity is a quintessentially American process. All of American culture is a tapestry of threads, homegrown and imported.

Of course, the folklore and mythology of Central and Eastern European countries feature many mythical animals, many of which combine different animals or elements: a variety of dragons and werewolves (Czech/Slovak “vlkodlak”), the Fire-bird (Russian “Zhar Ptitsa”, Czech/Slovak “Vtak ohnivák”), the Slovenian zlatorog (chamois with golden horns), or the Hungarian turul (eagle-like bird wielding a flaming sword). In fact, the jackalope appears to have a counterpart in Swedish and German folklore (skvader and wolperdinger, respectively). 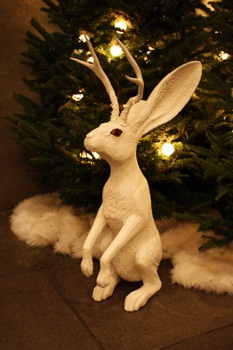 Jackalope the White, by Shelby Davis and Crystal Schenk, at "When the Mystery Is Too Overpowering One Dare Not Disobey", Wieden+Kennedy, Portland, Oregon, 12/1/2011

The latest jackalope sighting took place on Thursday, December 1st, at Wieden+Kennedy headquarters here in Portland, Oregon. The advertising powerhouse commissioned local artists Shelby Davis and Crystal Schenk to create a series of mystical animals, including a jackalope, a unicorn, a yeti, the Nessie, and a narwhal, to create a magical holiday experience. The foam pieces, painted pure white, will appear in the agency’s spacious offices throughout December.

The narrative from the exhibition brochure not only underlines the jackalope’s, and other creature’s, role in the perpetuation of American myths, it invites you to participate in their communal co-creation:

Literally everything about the holidays is magical. What captivates us the most are the legends. Here in the Northwest a group of creatures came to live–inspiring an enchanted tale of a holiday where unicorns, narwhals, white wolves with wings and more come together, under one roof that holds earth, water, and sky.

We invite you to add new chapters to old mythologies and have the experience become part of your own magical holiday story.

And so it goes: the jackalope continues its hop through American lore. Wildlife watchers welcome.

More photos from the exhibition:

3 Responses to “The Jackalope and the Evolving American Folklore”