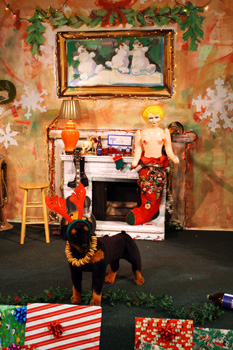 Merry Christmas from the set of Chervona's Xmas video shoot

I discovered the band Chervona by missing their street concert at the Polish Festival. I listened to their music online every time I postponed going to one of their bi-monthly shows around town. So I was going to be damned if I were to miss the video shoot for their Xmas song “Bottoms Up”.

Advertised on Facebook with a call for talent, extras, and production help, the shoot took place last Thursday, December 8th, 2011, at Lents Commons, a Southeast Portland Coffee House. The “Russian genius painter Andrey Nedashkovskiy” created a beautiful, festive, and slightly bizarre set. I showed up well into the shoot’s 2nd day to help as an extra for the mass party scenes, take a few photos, and witness the creation of what “NW America’s (and the world’s) ultimate party band” dubbed their “present for Chervona’s 5th birthday”.

The 4.5 hours I spent on the set seem like a blur now. Here’s what stands out two days later.

I enter Lents Commons and stand in the back, by the counter, to take the set in. Nothing seems to be happening, yet the place is buzzing. A man in a green ball cap who turns out to be Steve asks me for a cigarette, and when I say I don’t smoke, he asks, “Why?”. I shrug, and recommends I get a beer. (Later he will tell pedophile jokes.) They only have PBR, but it’s cheap. I ask the barista to point out the person in charge. He gestures toward a woman in red. “I hear you’re in charge,” I tell her. She confirms with a great deal of modesty, welcomes me, and suggests I get situated. Her name is Alma. That being a Hungarian word for apple, I think of an apple. I ask her how she knows the band. Smiling, she says, “I’m the muse.”

The next person to walk in, a librarian named Al, looks just as curious and clueless as me. But only for a minute: he brought help. The barista says we can’t drink the vodka inside. With an air of experience, Steve stuffs the Monopolowa bottle in an inside pocket of his vest, the three of us grab coffee cups, and slip out. Steve is a long-ago immigrant from Wales. He makes the dive bar across the street sound amazing. Al’s coworker is Czech or Slovak; by the name I’m guessing the former. As the vodka begins to seep through the cup seams, it occurs to me the season of sharing can happen—is happening—without anyone having to remind us. Later I buy Al a beer.

“Have You Seen Them Live?”

There’s a lot of standing and waiting around between scenes. At least there’s filming to watch, people to talk to, and PBR to sip (the vodka’s gone). Most people who aren’t in the band seem to be either their chance acquaintances or Facebook friends. The music brought us together. The band’s live performances come up a lot. “No, I haven’t, yet,” I admit, over and over, “but I’m going to their Russian New Year’s Party at Dante’s.” It sounds like many people will be there. I misplace another half-full beer. On the sofa, the Big Bad Wolf is reading a picture book. 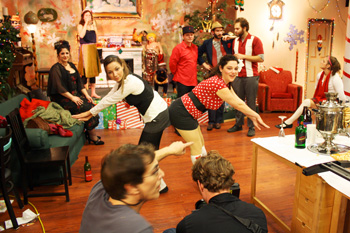 How to make a butt-bumping scene in a music video

On camera, I’m a member of the background party crowd. I wear an ear-flap hat (ushanka in Russian, baranica in Slovak) the director handed to me. The hat is white, furry, and too small for my big head. It’s also too hot, so I carry it in my hand or under my arm between scenes. Andre the frontman notices the hat’s lack of decoration just as he’s looking for somewhere to stick a large pin featuring a red star backing a gold sickle and hammer. He starts connecting the two pieces, pauses as I try to stop him. Hoping to clarify the matter, I say, “I’m from Slovakia.” He nods, shrugs, hands me the hat back, sans the star. The director calls for the next scene.

A dancing scene on the stage: sweating underneath the ushanka, I accidentally hit one of the school girls in the back of the head with a champagne bottle. She’s okay. We laugh about it later. Osama bin Laden photoshopped into a Santa costume is smiling from a Christmas card stuck in the tree. The blow up doll makes a lot of friends until someone stuffs her in the oversize stocking hanging over the fireplace.

In the dinner table scene (my last) we sway sideways, left, right, left, right, take after take. Maria sitting next to me says the song reminds her of the “Feliz Navidad” tune. I confuse her employer’s acronym with another, then clink my shot glass (water) with her champagne flute (diluted wine), and join the chorus, “Bottoms uuuuup!” It’s chilly outside.

More photos from the “Bottoms Up” video shoot: