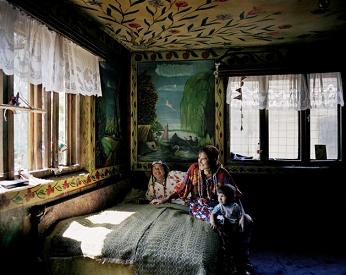 Portland’s Blue Sky Gallery has been on my radar screen since I discovered that it occasionally features photographs from Central/Eastern Europe. Over the past few years, I’ve seen, for example, Julie Denesha’s “Outcasts of Slovakia” (June 2009), Evžen Sobek’s “Life in Blue” (Czech Republic, May 2011), and Dana Popa’s “not Natasha” (Romania/Moldova, October 2011). Showing at Blue Sky Gallery in December, Joakim Eskildsen’s “The Roma Journeys” takes up where Julie Denesha left off.

on his travels through Roma communities in Europe and India from 2000 to 2006. In addition to Hungary, Romania, and Russia, Eskildsen and his wife Cia Rinne stayed with Roma families in Finland, France, Greece, and India, the Roma’s likely ancestral land.

It’s tough to attend a show on opening night. You want to be there at the first moment the art is available, but so do many other people. Blue Sky was crowded and I had to weave through the rooms with little space for reflection the photographs demand (on the flipside, I have an excuse to return and contemplate the photographs in silence).

In my motherland Slovakia, the Roma, or Gypsies, invariably come up in conversations, always as Them and rarely in a positive light. I lived alongside the Roma my whole life. I, therefore, possess a long-standing fascination with Westerners’ fascination by the Roma. I had expected to see another series of journalistic photographs pointing out, for a millionth time, the Roma’s desperate poverty amid Europe’s relative wealth.

For once I was glad to be disappointed. Though Eskildsen’s lens on the Roma is, indeed, documentary, even ethnographic, he brings an eye for artful composition into his work. These are, for lack of a better word, well-balanced photographs.

At the opening, Blue Sky’s founder and Board President Chris Rauschenberg told me that the combination of the artistic with the documentary/social scientific in “The Roma Journeys”

book, which he’d discovered at a photography trade show, was precisely what prompted him to highlight Eskildsen’s work.

“Our goal is to show the best photography we can find in the world,” Rauschenberg said. “Photography is the metaphoric definition of empathy: seeing the world through someone else’s eyes. Thanks to Joakim’s work, you can walk in here from a Portland street and not only get to see the Roma through his eyes, but get to live with them as well.”

Eskildsen shows the Roma living their lives as they are, without wagging a judgmental finger: you see sadness, you see the every day, you see contemplation, and yes, even happiness. Great works of art tend to succeed in highlighting a universal truth, and I found one in “The Roma Journeys”: at its core, life is the same everywhere, regardless of material conditions.

“The Roma Journeys” will be at Blue Sky Gallery until the end of the year.

Have you seen “The Roma Journeys” (the book or the exhibition)? Please share your impressions in the Comments.