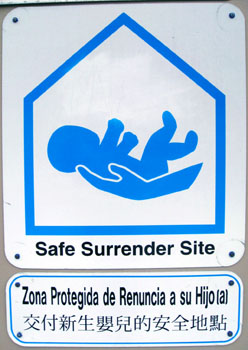 San Francisco can leave you with many memories, but the one that’s stuck with me most strongly is the sign I saw on a fire station (see right) indicating people can leave their unwanted babies there. Even two years later I have a hard time fully wrapping my mind around the American infant safe haven laws.

Many State legislatures have enacted legislation to address infant abandonment and infanticide in response to a reported increase in the abandonment of infants. Beginning in Texas in 1999, infant safe haven laws have been enacted as an incentive for mothers in crisis to safely relinquish their babies to designated locations where the babies are protected and provided with medical care until a permanent home is found. Safe haven laws generally allow the parent, or an agent of the parent, to remain anonymous and to be shielded from prosecution for abandonment or neglect in exchange for surrendering the baby to a safe haven. —U.S. Department of Health and Human Services

Yes, it looks like Texas can be a pioneer for good, even if the law is likely a response to a strong anti-abortion stance there. In California, the safe haven law is called the Safely Surrendered Baby Law, hence the copy on the sign, whereas in Oregon legal abandonment of a child falls under Chapter 418 – Child Welfare Services of the Oregon Revised Statutes.

The issue entails multiple aspects and controversies, which you can read about on Wikipedia, the National Safe Haven Alliance, and elsewhere. The point for me is that, to my knowledge, European countries don’t have an equivalent of safe haven laws (please correct me in Comments if need be). Until I saw the sign above, I had no clue it was possible in the U.S. to legally abandon your child. It brings up a host of thoughts.

It would be too easy to judge those who resort to abandoning their child, particularly without knowing what drove them to the decision; I can image a number of desperation scenarios. You could also argue the law creates even more space for Americans to avoid taking responsibility for their actions. What I appreciate about the infant safe haven laws, however, is that it decriminalizes an act of desperation in order to focus on safety and welfare of its helpless victim, something more laws could use.

Until that happens, please share your thoughts about infant safe haven laws in Comments.