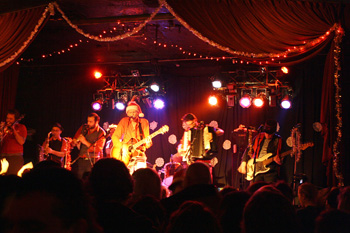 In a happy coincidence, Friday the 13th was also Orthodox New Year’s Eve, and if the party Chervona threw at Dante’s is any indication, 2012 will be awesome. A few recollections from the night linger through the night’s haze.

The Show Before the Show

I call it Old New Year at Soup-n-Vodka Kitchen: a small pre-party with kapustnica, vodka, and cheap beer. The warm-up works so well I forget about the clock and don’t want to go anywhere.

Still giggling at the detour sign a few blocks back that said "MORISON  BR  EAST  DETOUR", I find the block-long line in front of Dante’s daunting. Later I learn of people who waited so long in the cold they went home.

We enter just as Chervona takes the stage. The inscription above the entrance may be an Italian classic (“Abandon All Hope Ye Who Enter Here”) but the fragrances inside are decidedly Russian, jolting my memory of Eastern-European proclivity for perfume. Chervona’s frontman Andre is dressed as Baba Yaga. I am a boy again.

Backstage in the Basement

The music takes a while to start, so I wander. To the right of the stage I discover mysterious stairs leading to a basement. I descend and find myself backstage. "First violin of Denmark is a Russian girl" Vera peels her eyes off her boyfriend to give me and my camera a questioning look; two members of Pava sprucing themselves up in front of a wall-length mirror follow. All I can think of is the vodka breath they surely must smell on me. They relax after I explain I have permission from the band and ask them if I can take photos. The sight of a tub filled with PBR tallboys makes me thirsty.

The Event on the Edges

In front of the stage, the event is a concert. Around the edges and in the side space behind the bar, it is a New Year’s party for the compatriots. Men and women in fancy clothes sit around drinking cocktails or dance in pairs. I spot a fur coat. There’s a lot of picture-taking with smartphones. Two young women are sitting on a ledge, leaning toward each other, arms crossed. Their heads touch as they sing along. "Do you know the lyrics?" I ask them. "Yes," they say in unison, "we’re Russian."

The next day I learn I am not alone in feeling the event takes place on the edges.

As I meander, I run into a number of alumni of Chervona’s Xmas song video shoot. The music being too loud to chat, fist bumps, hugs, nods, grins, and raised glasses ensue. It feels like a TV show season finale, in which all the characters meet on screen at the same time. The show provides closure.

Many songs sound familiar, like forgotten echoes of childhood bouncing back across the decades. Bouts of nostalgia clash with mild irritation as I realize that even after all these years the disco nightmare of Boney M, whose hit "Rasputin" Chervona covers, is still just that. The crowd is screaming. I fear the dark, burning eyes from "Ochi chyornye."

The Countdown With a Pirate

I wade through the swarm to the bar when the band pauses to count down to the New Year. Helping me flag down the bar tender is a woman in a pirate costume. She’s part of a group. Earlier, never having seen a pirate, I shared my discovery with my party. One of the pirates, a big dude with his head wrapped in a colorful scarf saw that and walked up to me. I froze, wide-eyed, and blurted, "You’re a pirate!" He laughed, confirmed my observation, and I felt relieved I wasn’t going to get my ass kicked. The bartender hands me the beer and takes my card just as Dante’s shakes to, "Three, two, one!"

The Kindness of Strangers

The New Year is cold outside. I reach for my wool hat but can’t find it in my jacket pockets or the camera bag. I return to the club, now slightly emptier, to scan the floors. The music is background noise and people just legs as I come up empty. Lindsay calls a cab and we begin to wait at a bus stop. A Number 17 blows by from a direction that isn’t its route. I run after it, flailing my arms, yelling for it to please take us home. I watch it stop a few blocks up, too far. Lindsay says, "Let’s just wait for the cab." A few minutes later, another 17 bus pulls up at the stop. We tell the driver we had just been chasing a 17. She admits it was her. A passenger saw me, and she circled around the block to pick us up. My head is cold but I feel warm inside.

Lindsay and I whistle the catchiest song’s tune the entire two long blocks from the bus stop to our house. At 1 am, we must be a nuisance, but when a man walking on the opposite side of the street up to his house begins to whistle too, we laugh and whistle back even louder. At home, we pour each other a final vodka shot. The new year is ours.

Photos from the show:

4 Responses to “The Edges of Old New Year With Chervona”