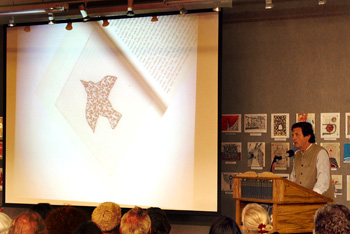 Following up on my review of Peter Sís’s new book “The Conference of the Birds” and our conversation at his reading here in Portland, Oregon, I asked Peter about his experience as an émigré. We spoke via Skype on New Year’s Eve, I in Slovak, he in Czech; the interview below is an English translation and edit of my Czech and Slovak notes.

American Robotnik: In your latest book, “The Conference of the Birds”

, birds are the main characters searching for the king that will solve the world’s problems. What fascinates and inspires you about birds? What prompted you to recently say, “We are the birds”?

Peter Sís: I’ve been fascinated by birds since an early age. Growing up in a country where travel was difficult, even impossible, I used to watch birds and think that they can fly anywhere, any time, without passports, without having to ask for permission. Birds and their symbolism are always around us.

When I was working on “The Conference of the Birds”

I realized that to tell a story about birds I didn’t have to describe their individual characteristics, that they’re young or old, male or female, black or white. In the book I only described in detail the hoopoe bird and the birds that hesitate to fly with him in search for King Simorgh. All the birds then become a single flock, a unified form that makes it unnecessary to describe any individuals within it. In the search for spirituality it is the journey that becomes important. The birds in the flock become democratized and it doesn’t matter who is what or what they look like.

At the same time, in the original Sufi poem all the birds lose their individual selves when they form the single bird at the end of their quest. Essentially, they become nothing as they dissolve in the collective. That notion frightened me, especially considering I grew up behind the Wall. Like Sufis in their time, in communist Czechoslovakia you couldn’t tell the truth. But if we all decide to live in a group and make collective decisions, we each can retain our individuality, even though it may not always be prominent. We are all different. That’s why every individual bird that forms the bird at the end of the book is a different color, a distinct shape.

Ultimately, “The Conference of the Birds”

is a meditative book. It’s difficult for me to talk about it in depth. I rely on the word of mouth and people’s personal recommendations. The way samizdat used to work…

American Robotnik: In your Portland talk, you said that all your books are “about going from one place to another”. What do you find compelling about that movement, about journeys or quests, about leaving home and going elsewhere? How does your emigration fit into the picture?

Peter Sís: When I was a boy, my father went on a long trip to Tibet. I grew up reading books about travelers and discoverers, such as Jules Verne’s novels. From very early on my heroes were people discovering things, reaching the top of the mountain, the bottom of the ocean, or a new land. Then in the 1960’s I became involved in the music scene, drawing album covers or posters. The entire decade was about the search for life’s meaning, about the journey.

For a long time I thought the discovery had to be physical, until I realized that every place on Earth had already been discovered. I became fascinated with people who traveled in their minds to metaphysical places, people like Galileo, Darwin, or Václav Havel, whose “Letters to Olga” I read at the time. A lot of books are about the discovery of who we are and where we’re going, and the journey need not be across an ocean.

After I emigrated, I would tell my parents about everything that fascinated me in America: Las Vegas, the Grand Canyon, New York… I needed to share the information about what I experienced or saw. But the longer I lived here, the more I came to understand that the essence of emigration isn’t going from one country to another but going from a place you’re used to to one that you aren’t.

American Robotnik: Many who emigrated from communist Czechoslovakia returned after the Velvet Revolution, whereas you stayed in the U.S. What’s kept you here? Have you found what you were looking for? How American do you feel? How Czech?

Peter Sís: I’ve been in the States for 30 years and have had a chance to meet a lot of immigrants, young and old. Everyone experienced emigration and settling down in a different way. Some can’t stand it, others draw inspiration from it.

A century ago people fled hunger and poverty. Making a new life was easier for them and they couldn’t think of going back to where they suffered so much.

During communism, political emigration was more prevalent. By the way, your question reminded me of a book I read when I was little, about a boy whose family left Slovakia for America because of economic conditions only to return because they couldn’t make it there.

My generation lacked opportunities so we lost a lot of time and energy thinking about what we wanted to be and what we wanted to do. Today, people don’t have to think about these things, they can live internationally.

I used to visit Prague several times a year while my parents were still alive. Nowadays I go once or twice a year, depending on what I’m working on. I can’t find the Prague I knew, however. It no longer exists. It’s a tourist area, all painted in bright colors and lights. To see what Prague looked like I have to walk the side streets of Venice, where buildings are falling apart.

After hundreds of flights to and from Prague, I live in both places, speak two languages. When I give interviews in Czech, the meaning behind words isn’t as strong as if I only spoke Czech. And in English I have an accent.

I compare my emigration to boarding a plane and never getting off. Thinking about being from somewhere and going somewhere else makes me feel I’m neither here nor there. It’s a journey with no end, a constant motion.

The birds, too, fly across the endless universe.