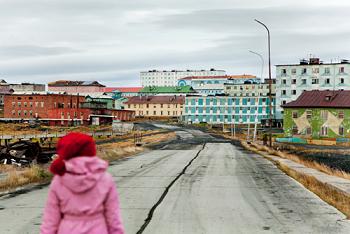 From "Tiksi", a series by Evgenia Arbugaeva

When you live outside your country of origin, particularly if it’s overseas like, say, America, every trip ‘back home’ turns into a special occasion. If you’re Evgenia Arbugaeva, not only may it take 18 years to go back, it may also be the last time you see your home town.

Tiksi is Arbugaeva’s ‘home home’ in Siberia, on the shores of the Arctic Ocean, at the true edge of nowhere. A former military and scientific base, Tiksi emptied after the Soviet Union fell apart.

Arbugaeva returned after almost two decades of living primarily in Yakutsk and New York to “capture a special town before it disappears”. The time and distance only made the desire stronger. In an email interview, Arbugaeva wrote, “Now after all these years of traveling, studying and living in New York my desire to come back didn’t disappear, but only became stronger. I know that there is no place in the world as special as Tiksi. Yes, I wanted to photograph it, of course, but more than that I wanted to see it and feel it again, it was kind of my fixation.”

The results from her “journey through surreal childhood memories” are now on exhibit at Portland’s Newspace Center for Photography.

As Arbugaeva writes on her website, the concept behind the photos is simple: a little girl wakes up from a dream and ventures out to explore the green darkness of the Polar Night and beyond.

She loved these colors very much. Walking through them made her imagination come alive. She liked to think of the fields as blank canvases for Mother Nature to paint upon. And what did that make her? Was she part of the painting too, in her pink jacket and red hat?

Arbugaeva admitted to me she had always wanted to go back. In fact, in her artist statement at Feature Shoot, she writes, “I have always wanted to be that little girl again.” Upon her return to Tiksi, she befriended Tanya who reminded her of her younger self and what it meant to be a child there. Though it seems the photographs are a joint re-creation of her memories against Tiksi’s eerie backdrop, Arbugaeva wrote, “Those images are not staged, and I wouldn’t consider them as a re-creation of my memories too. They capture real life and real situations. Maybe they feel as re-creation because I couldn’t help to add some of my personal nostalgia there.”

While your Central or Eastern European home town may not be this vacant, you’ve surely felt the sentiment: each time you visit: the canvas of memory turns emptier just as its significance grows. You walk through the places where you grew up—your apartment building, your school, the playground—and what you experienced there years ago not only recedes further into the past, it loses the details you thought so important at the time, while the details that do remain become all the more precious.

Her past may be gone and the village will likely disappear, too, but Arbugaeva attempts to halt the progress of disappearance. In her email, wrote, “Memories from my childhood were so bright and colorful that I remembered them forever.” The effort felt familiar, but I also experienced a tinge of voyeurism looking at Arbugaeva’s memories. This also happens when I see mementos people display on their shelves or refrigerators. If you acknowledge that artifacts, tangible or not, from your own childhood are your most precious possessions, looking at Arbugaeva’s will only increase the urgency to preserve them.