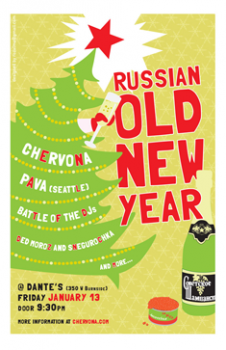 And judging from Chervona’s Xmas video shoot a month ago, a good one too! In fact, most, if not all, of the good people who populated and helped shoot the video (below, includes American Robotnik in a snow-white ushanka) will be in attendance at Dante’s on Friday the 13th. Tickets may even still be available.

According to Stephanie Salvey’s intro to the reprint [pdf] of my article about the video shoot on Oregon Music News, “Each year around this time the cheapest round trip to Russia is a ticket to Chervona’s Old Russian New Year party.”

Who else will be there in addition to the aforementioned video stars? The event’s lineup as seen on Chervona’s Facebook page, appropriately named “Chervona Party”:

Ded Moroze (Russian Santa) and Snegurochka (Snowgirl) will also pay a visit, and there is a prize for the best costume as well.

The Old New Year is a celebration of the new year according to the Julian calendar, which many orthodox churches still honor. In addition to Russia, the orthodox New Year is also celebrated in Armenia, Belarus, Bosnia and Herzegovina, Georgia, Kazakhstan, Macedonia, Moldova, Montenegro, Serbia, and Ukraine.

See you there! If you can’t make it, at least watch the video: