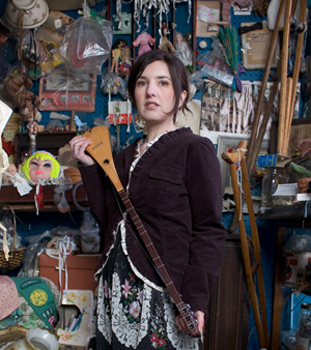 When I read "You Must Go and Win," I knew I not only had to review it on account of its subject matter’s relevance to American Robotnik, but also try to interview the author Alina Simone. We talked yesterday via Gmail Chat about Russia and Russianness, about music and writing, and about doing your own thing. The first question was hers, about my experience reading her memoir: "Are you scarred?"

American Robotnik: In your New York Times T Style interview, you talk about growing up as an American kid and, later, feeling you had to learn about the country that shaped your parents and grandparents. What made you change your mind? What were you looking for and did you find it? How did the exploration of your heritage and your discoveries shape you?

Alina Simone: I can’t remember the exact moment when I decided to explore my heritage. Growing up in Massachusetts during the Cold War, in the 1980’s, it was uncool to be Russian. There was nothing great about it, and I wished no one knew I was Russian. It was like a stain on me. My family had been exiled, we were political refugees. I thought I’d never go to Russia because we weren’t allowed.

Then the Soviet Union fell apart the year I graduated high school, and I started to feel, maybe it isn’t so bad, being Russian. More Americans started to go there, things started opening up. I got exposed to Russian indie rock, I started to read a lot of Russian literature and books about Russia. I became intrigued and wanted to go there.

My parents thought it was totally crazy. For many years they discouraged me from going. Then, as I write in the book, my grandpa passed away in Kharkov, Ukraine, where I was born. I had never met him and now he was dead. I knew I had to go. I told my parents I understood where they were coming from. The had a bad experience, they were damaged and scarred. But it didn’t apply to me. Their experience of the country I’m from couldn’t be my experience. I knew I had to forge my own path and make my own connection.

Every trip I took to Russia was for work or music, I never just got up and went. With the international development nonprofit, I wanted the most intriguing assignments. My first trip was to the armpit of Russia, a formerly closed city near the Mongolia-China border. It was a 24-hour train ride from the nearest airport. Even Russians say it’s remote. But I got to meet indigenous people there, for example. Overall, Russia is deeply weird.

Half of the book is about Russia. It put me out there in terms of my Russian background, and people reach out to me, mostly to commiserate. But it has snowballed. I get asked to sing in Russia and all kinds of other things. I don’t always say yes to all of them, for risk of being pigeon-holed. For example, one thing my publicist wanted me to do is take a group of people on a tour of Brighton Beach and take them to the best bars to drink vodka. I didn’t do it. Just because I’m Russian doesn’t mean I’m alcoholic or even know those places. I can’t play off of Russian stereotypes I don’t even conform to.

American Robotnik: In "You Must Go and Win," you write that while in Siberia you experienced "a latent desire to go native," and go on to describe yourself as "a person more than a little impatient (desperate?) to embrace my ancient heritage and lay claim to the corresponding dose of unbearable suffering that was my birthright." Where did that latent desire to go native originate? What made you so desperate to get a hold of your Russian-ness?

Alina Simone: I grew up in a Russian environment. All the adults I knew were Russian. My parents still don’t have a single American friend, all their friends are Russian. I never felt comfortable around Americans. Even now I feel a little uncomfortable when I visit my American friends’ parents. My husband’s parents can still throw me off.

But I understand my Russian nanny, even though she’s from a completely different part of the country. I feel like I understand her, even when she talks about her weird superstitions. Her hopes for her child are the same as mine for my daughter. I think there’s a lot of continuity in Eastern Europe in values and experiences. Culturally we have a lot in common.

American Robotnik: Your original music seems to only rarely reveal your Russian roots; even the covers of Yanka Dyagileva’s songs sound American. Why do you think is that? Is there a line which Russia can’t cross? On a related note, does the music of ‘post-Soviet nostalgics’ like Gogol Bordello or Golem! speak to you in any way? What’s your take on the genre?

Alina Simone: I grew up here in the States and my music reflects that. The culture I experienced inside my parents’ house was Russian, but the culture outside of it was American. I listened to rock n’ roll like all the other kids.

Yanka’s and my music have a lot in common stylistically. My Yanka covers are my interpretations of her music, an attempt to translate it for American indie rock audiences. I didn’t want my versions to be the cultural equivalent of whole grains.

For bands like Gogol Bordello it makes sense to do what they do. Eugene came over as an adult and his art is much more influenced by his experience.

American Robotnik: What’s next? What are you working on now? Are you continuing to explore your Russian background?

Alina Simone: Not really. I said what I wanted to say in "You Must Go and Win." I don’t want to repeat myself and write another book with the same themes. It’s easy to stay in your comfort zone, and to continue writing about Russian American culture would be easy. I really didn’t have any more original thoughts than what’s in the book. I did write a TV show pilot based on "You Must Go and Win." Later this month I’m going to LA to pitch it.

Last week I finished the first draft of my first novel, "Late Bloomers," where only one minor character is Russian. Hopefully some day, when it’s worked its way through the machine, the novel will see the light of day. An excerpt has just been published at BOMBlog.

I have a few other things in my drawer, all in progress. I don’t have abandoned projects in there. It sometimes takes long to make some things happen, but I like to finish what I started.

I keep busy but honestly I’m not so brave. All you can really do is be yourself, regardless of what’s more prudent or what makes money or what’s marketable.