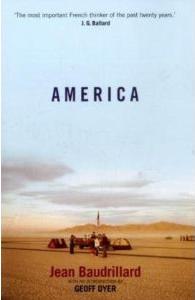 Visiting and then writing about the U.S. has a solid tradition among the French, but it’s safe to say the late Jean Beaudrillard‘s 1986 work"America"

hasn’t made the list of books covering their country that Americans would showcase. Even the most cynical among my new compatriots would hesitate to call their country "a giant hologram", a "blank solitude," or a "narcissistic refraction." Abstract hyperbole defines Beaudrillard’s "America"

On the ground, it is the desert that defines Beaudrillard’s America. He can’t get enough of it because "you are delivered from all depth there—a brilliant, mobile, superficial neutrality, a challenge to meaning and profundity, a challenge to nature and culture, an outer hyperspace, with no origin, no reference-points." America is simply a vast space—it is "the very form of thought."

The focus on space renders the narrative static, suspended in a timeless void. America "lives in a perpetual present." This is how Beaudrillard approaches travel: outside of time. His trip is "without any objective," without a purpose or destination, and thus endless. He floats through the country, freeway to highway, motel to rest stop, town to city. The privilege allows him to over-generalize, albeit delivered from all depth. Any visitor to this country will generalize, drawing conclusions that reinforce the stereotypes; Beaudrillard joins the distinguished club of fellow French philosophers who base sweeping statements about a complex culture on a single trip.

Beaudrillard, who had earlier developed a theory of simulacra and simulation

, sees America as "neither dream, nor reality. It is a hyperreality because it is a utopia which has behaved from the very beginning as though it were already achieved." His America is the original desert of the real. But Beaudrillard contradicts himself when he maintains that, whereas Europeans conceptualize reality, generating ideas based on empirical experience, which is true of his own analysis here, Americans realize concepts, turning ideas into material reality. The weight of all that space is palpable throughout the book, all too real and over-dramatized. Post-modern or not, the paradox, too, appears to be a minor tradition in French philosophizing about America.

To a visitor like Beaudrillard, the United States can indeed appear unreal. There are too many stimuli, too much happening, even in the desert, as your stereotypes face off with what your senses perceive. A tourist’s view as an observer vastly differs from the experience of the locals who live the reality the visitor purports to see through and analyze. As Beaudrillard runs through a list of American phenomena any visitor will take in—driving and freeways, jogging, obesity (yes, in 1986), Los Angeles, smiling, screens (TVs, computers), banks, money—he falls into a trap of his own making: that the author of the simulacrum theory sees America as if it were a movie. Hyperreality you expect, hyperreality you see, hyperreality you get.

France’s leading philosopher of postmodernism takes to the freeways in a collection of traveller’s tales from the land of hyperreality. From the sierras of New Mexico to the streets of New York and L.A. by night—"a sort of luminous, geometric, incandescent immensity"—Baudrillard mixes aperçus and observations with a wicked sense of fun to provide a unique insight into the country that dominates our world.