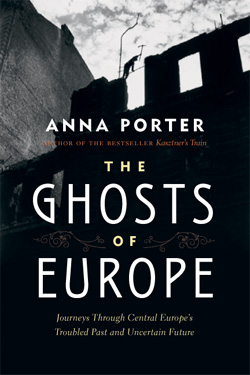 Anna Porter’s The Ghosts of Europe explores the state of affairs in Poland, Czech Republic, Slovakia, and Hungary, 20 years after the end of state socialism. In each country she discovers that the historical triumphs and, more frequently, traumas remain far from being settled history. Two decades of free speech and free market may actually have intensified the debates among competing versions of history.

To paraphrase Jan Gross, whom Porter quotes, “In order to reclaim its past, [insert Central European country’s name here] will have to tell its past anew.” Porter finds that many versions and interpretations of history exist in each of these countries. The observation forces her narrative to turn meta: she documents unfinished histories of settling official histories.

The politics of memory is a nasty affair, and Porter does well to stay above the fray and play the role of an outside observer. The descriptive and analytic depth varies throughout The Ghosts of Europe: Poland and Hungary get a relatively deeper treatment, with a broader variety of interviewees and themes, while she seems to breeze through the Czech Republic and Slovakia. The project of covering decades of tumultuous history in four countries at once makes for an occasional equivalent of a drive-by.

Even so, Porter succeeds in drawing parallels among the foursome. The picture she draws is of a sense of victimhood, lack of national self-esteem, continued blaming of the Other, persistent antisemitism and ‘antiromaism’, and rampant corruption. Having emigrated with her parents from Hungary in 1956, the journey has a distinct feel of a return, with an unspoken tinge of disillusionment.

Inconsistent punctuation mars an otherwise powerful narrative; there’s no apparent reason why György Konrád‘s name would be spelled correctly but Milan and Martin Šime?ka’s not. But Porter is writing for the Western reader, and her facts are solid throughout.

The Ghosts of Europe

demonstrates that even two decades of democratic discourse aren’t enough to establish societal consensus on history. Perhaps, as I’ll explore in an upcoming post, what defines Central Europe on the cultural level is the constant retelling of history and the search for consensus about the past. It may take these countries “on the periphery of someone else’s center” to become their own centers and shed what György Konrád labeled “satellite mentality,” to finally reconcile competing versions of their pasts. Until then, Porter and her ilk, such as those in the book’s excellent bibliography, may need to act as myth-busting arbiters.

Gradually, a portrait emerges of a Europe struggling under the weight of history and memory, its peoples divided over half-forgotten events, old ethnic rivalries, borders drawn and redrawn—ghosts that had lurked, unacknowledged, under Communism’s force-fed stories of peaceful coexistence and a common front toward the Western enemy. Now, Central European rhetoric veers between historical reckoning, revisionism, and the politics of retribution. Penetrating, fascinating, and powerfully observed, The Ghosts of Europe

illuminates themes of tyranny, nationalism, racism, and denial in nations with a tumultuous history and a future very much in the balance.