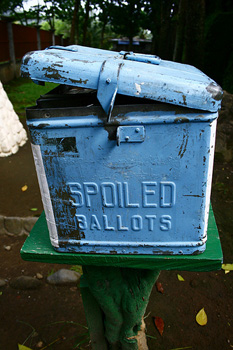 The upcoming early parliamentary election in Slovakia reminded me of a different sort of neither-here-nor-there handicap new immigrants experience: I call it the civic limbo.

Until mid-2000’s you had to be present on the territory of Slovakia, Czech Republic, Hungary, and Poland to vote.* If you had moved to the United States, you were unable to vote in your old country’s elections and, as a non-citizen, not yet allowed to vote in your new one’s. You were left out of the democratic process anywhere. True enough, to the extent you left your country on your on volition your disenfranchisement was voluntary. But it was no less real.

This was my case. I left Slovakia in 2000 to study at the Central European University. From 2002 to early 2003 I lived in the Netherlands; since then in California and Oregon. The last time I cast my vote was in Slovakia’s parliamentary election of 1998 (and the presidential one in 1999; see Notes). The U.S. and Oregon electoral calendars will enable me to vote as a U.S. citizen in November 2012, a mere 14 years, or 82% of my adult life, since I last cast a ballot.

Vote by Mail, If You Dare

Core Central European countries have allowed voting in national elections from abroad since roughly the mid-2000’s. My homeland Slovakia adopted vote-by-mail in 2006. The upcoming early election in March will be the 3rd parliamentary election in which citizens who reside outside the country can vote from their current country of residence. Voting from abroad has been possible in Poland, Czech Republic, and Hungary since about the same time. For example, Czech Republic’s 2010 election was the third national vote since 2006.

The process to vote by mail in Slovakia is two-step: first, you must register in the Petržalka district, which handles all voting by Slovaks abroad. (In researching this post I found I missed the January 20 deadline to register for the vote-by-mail by almost 3 weeks.) The elections office will then mail you a ballot. You then have until March 9, the day before election day, for the ballot to arrive in the elections office.

Procedures for voting from abroad vary across the region. The general requirement is registration in the home country, and you have to vote at a consulate. To the best of my knowledge, only Slovaks mail in their ballots.

The Civic Neither Here Nor There 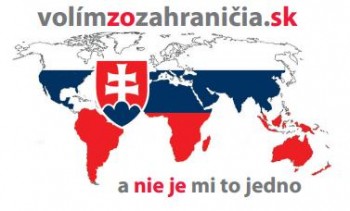 A graphic for Slovakia's vote-by-mail service. The caption translates, "I vote from abroad" (top), "and I care" (bottom)

By the time voting by mail was possible in Slovakia, I’d been living abroad for 6 years and in the U.S. for three, enough time to stop paying attention to, or even caring about, Slovak politics as much as when living there. It had less and less bearing on my life as I started to realize I wouldn’t be returning for a while. And when I began making a new life in the States and Slovakia joined the European Union, I disconnected almost completely, aside from having a general idea of what’s happening there.

It’s likely this happens to many Central Europeans who settle in the U.S.A. Tatjana (Tanya) Pavlovic, who blogs at Czechmate Diary and who has been in the U.S. since 1999, has told me, “I haven’t voted since I left 13 years ago. I also don’t follow Czech politics enough to make an intelligent electoral choice.”

Because I knew voting from abroad was impossible, I had one less incentive to keep myself informed. In fact, until now I’d had no idea I could have voted from Portland, Oregon, in two prior elections! Finally, that Slovakia’s vote-by-mail entails a certain amount of hassle, is, in fact, the said to be the primary barrier to voting from abroad.

Pair an emigrant’s disconnect from his home country’s affairs with the logistical difficulties of voting from abroad, and you get a reasonable explanation for the low number of vote-by-mail registrations and votes cast from abroad.

You are legally not allowed to vote in U.S. elections unless you become a naturalized citizen, which can take 3-5 years from acquiring legal residency. In the meantime, your civic disenfranchisement, voluntary as it may be, pales in comparison with the challenges of making a new life in America. In the period when you no longer care about your home country’s politics and can not yet vote in your adopted one’s, you may not have the energy to contend with your civic limbo. Based on my experience, it may not be until your life begins to settle down, which took me 7 years, that you begin to feel the need to participate in the democratic process.

My civic limbo will soon be over and with it an indelible part of immigration experience.