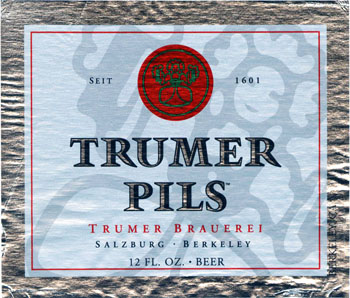 Trumer Pils label off my bottle

Trumer Pils is a memory of Salzburg I never had.

I visited the city of Trumer’s origin with my father in 1992. We stopped there for a few hours on a train trip to Switzerland. I recall two experiences from our sightseeing walk:

At 16, I had only drunk beer behind the grocery store near my high school. And though I could also steal a sip from my father’s beer at home every now and then, I couldn’t ask for one in public, not to mention in the West, which was still novel to us. Besides, we couldn’t have afforded it even if we’d known Trumer existed.

When Trumer Pils appeared in stores and pubs here in Portland, Oregon, a few years back, it brought Salzburg along. The 400-year old brewery has brewed Trumer Pils since mid-19th century and until its license in 2004 to be brewed in Berkeley, California, it was only available locally. Its distribution soon expanded along the West Coast and beyond. It’s widely available in grocery stores, and many pubs around town serve it on draft.

Trumer Pils is the rare beer that tastes better out of the bottle, which may elicit a slight surprise since the packaging positions it among light, premium European beers. Depending on your politics, the Salzburg-Berkeley pairing on the label can play with your expectations as well.

The beer itself pours a tall, if a bit thin, head. Rich carbonation sings through the light-yellow color I associate with German lagers. The brew starts out with a light note, rising with a mild bitter in the second movement. The balanced hoppy climax reminds you that you’re drinking a pilsner, albeit without quite reaching the crescendo of flavor you expect from one. Then it leaves without ringing your taste buds with the heavy aftertaste some Central European pilsners do, and you find yourself wanting more.

Music to the palate, Trumer Pils completes my Salzburg.

Word from the Brewer