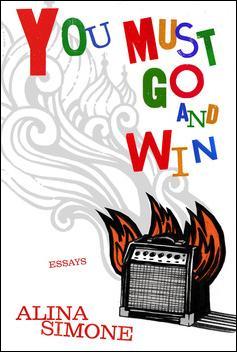 Alina Simone’s critically (and, on occasion, uncritically) acclaimed collection of personal essays "You Must Go and Win," documents her circuitous path through music industry’s wilderness and the discovery of her Russian roots. You must go and read it.

and Sedaris find humor in the banality of life; both are self-identified outsiders; both are yearning for something defined only vaguely. But to compare the two is on par with saying that their last names begin with the letter S.

In her review of "You Must Go and Win" in The Jewish Daily Forward, Yevgeniya Traps maintains that Simone belongs to the category of young immigrants who are "crippled by the realization that they—coddled and suburbanized—can never be as tough as their parents, who were disciplined by Communist deprivation and driven to the terrible risks of emigration. This second sort is moved to re-enact, typically with comical results, the experience of displacement and relocation in their career choices."

In the book, Simone recognizes how good she, born in Kharkov, Ukraine, but for all intents and purposes an American, has had it compared to her parents. She also knows that the safety and freedom of her American life deprived her of a force to combat (in fact, in a tacit acknowledgment of her parents’ willpower, she mentions little by way of past rebellion against them). Traps’s interpretation limits in scope the re-enactment of parental experiences. All kids follow in their parents’ footsteps to some degree. Judging from from Simone’s account, her parents’ hardship translates into her entire existence. Children of exiles may carry their parents’ spirit of displacement. But their fight is no longer against an outside power, it is against the self.

Searching for a Life

The late Michael T. Kaufman once told me that the best way to discover a place is to get lost. In "You Must Go and Win" Simone seems lost already, feeling her way through the darkness of uncertainty, grasping for signs. You get a sense that the journey to success is as painful as it is aimless. She tries art school, nonprofit work in Siberia, video-making, and the Orthodox faith, to name just a few experiences. Simone’s sampling of what life throws her way resembles the patchwork of post-modern, progress-less existence. As I tried to make sense of the zigzags, I kept thinking that one of my mother’s many sayings would describe them accurately: "She doesn’t know what to do with herself" ("Nevie, čo so sebou," in the Slovak original).

Simone’s search for identity is also a search for authenticity. While working in Siberia, Simone experienced "a latent desire to go native" and goes on to describe herself as "the daughter of Soviet political refugees and a person more than a little impatient (desperate?) to embrace my ancient heritage and lay claim to the corresponding dose of unbearable suffering that was my birthright," Like many immigrants making their way through America today, Simone seems to have realized that the real she seeks may be whence she came.

Simone seems no closer to her goal at the end of the book than she is at the beginning (one reviewer on Amazon complained of a confusing timeline). Yet it’s no accident that "You Must Go and Win" is the title of the book’s final essay. The absence of a clear destination, a map, or a schedule brings with it an openness to what may come. Along the way, adventures await.

Simone conceals subtle hints at her own strength beneath the surface pathos of an artist’s grind and her bizarre experiences. She knows discovery comes with a price, and she doesn’t appear to want it to be free (if she were a sports buff she might be chanting, "No pain, no gain"). Traps is right to compare Simone’s quest to making it in America. If, like Simone, you manage to at least keep your head up, you are already well on your way.

Simone offers more than down-and-out tales of her time as a struggling musician: she has a rapier wit, slashing and burning her way through the absurdities of life while offering surprising and poignant insights into the burdens of family expectations and the nature of ambition, the temptations of religion and the lure of a mythical Russian home.