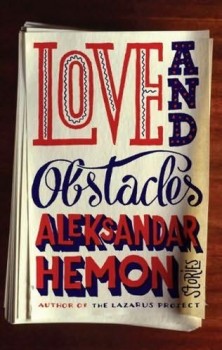 Emigration is hardest when it’s involuntary and when you cannot return to your country of origin.

Alexandar Hemon, a native of Bosnia and now a Chicagoan, has based his career as a fiction writer on this theme. When he was visiting the States in the early 1990’s with a journalism education program, the war broke out in the former Yugoslavia, his hometown Sarajevo came under siege, and he was unable to return.

The theme carries the short stories in "Love and Obstacles"

, tracing a single protagonist’s journey through childhood, immigration, and memories. He plays war with his boyhood buddies; he endures his family’s quirks; he suffers through the hardships of settling in America. Each episode looks forward and back as nostalgia battles depression and home its unworthy American substitute, more by way of obstacles than of love.

Every writer incorporates his own experiences into his work (Hemon shows as much in the book’s final piece, "The Noble Truths of Suffering"). The stories here, as well as in the past works of his that I read, feel very autobiographical. All the more so because as I turned the pages of "Love and Obstacles,"

I couldn’t shake a sense of déjà-vu: I felt like I’d read these stories before, met the characters, felt the emotions the stories impart. But rather than akin to visiting an old friend, I felt like visiting a family member who’s still possessed by the same thing.

When I first encountered Hemon’s writing, in his first short-story collection "The Question of Bruno"

and the debut novel "Nowhere Man,"

I was smitten by his command of language, the imagery, the emotional depth. Having just arrived stateside and begun my own journey of immigration, I related to Hemon’s characters and their experiences on a deeply personal level.

Our paths have since diverged. Now, when I read that snow is "detergentlike" or that a "tie stretched across the chair seat, like a severed tendon," I cringe under the weight of each page. Too many adjectives, too many heavy-handed similes and metaphors, too much telling at the expense of showing. Hemon is too talented and acclaimed a writer to revert to a beginner’s bad habits.

It’s possible the stories in "Love and Obstacles"

are simply collected early outtakes, which would make the book a matter of closure, but I can only go with what I have and see what Hemon’s future work brings (I do plan to ask him if he agrees to an interview).

All [stories] are infused with the dazzling, astonishingly creative prose and the remarkable, haunting autobiographical elements that have distinguished Hemon as one of the most original and illustrious voices of our time. [B]ecause it’s Aleksandar Hemon, the stories extend far beyond the immigrant experience; each one is punctuated with unexpected humor and spins out in fabulist, exhilarating directions, ultimately building to an insightful, often heartbreaking conclusion. Woven together, these stories comprise a book that is, genuinely, as cohesive and powerful as any fiction- achingly human, charming, and inviting.

2 Responses to “Emigration and Its Weighty Obstacles”