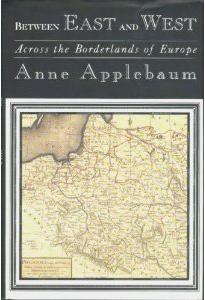 Eighteen years ago Anne Applebaum traveled through the flat lands between Russia and Poland and documented her journey in "Between East and West: Across the Borderlands of Europe."

At first glance, it was a different time: Communist governments had toppled a few years before and the chaos of transition to democracy pervaded all life. But, Applebaum presages what Anne Porter documented in last year’s "The Ghosts of Europe"

Travel here demands a forensic passion, not merely a love of art or architecture or natural beauty; there are many layers of civilization in the borderlands, and they do not lie neatly on top of one another. A ruined medieval church sits on the site of a pagan temple, not far from a mass grave surrounded by a modern town. There is a castle on the hill and a Catholic church at its foot and an Orthodox church beside a ruined synagogue. A traveler can meet a man born in Poland, brought up in the Soviet Union, who now lives in Belarus—and he has never left his village. To sift through the layers, one needs to practice a kind of visual and aural archaeology, to imagine what the town looked like before the Lenin statue was placed in the square, before the church was converted into a factory and the main street renamed. In a conversation, one must listen to the overtones, guess what the speaker might have said fifty years ago on the same subject, understand that his nationality might then have been different—know, even, that he might have used another language.

Applebaum performs the task admirably, confirming that the version of her I know from Slate and other venues was already fully formed back then. The personal encounters and observations take place on the background of impressive historical research, as Applebaum backs every assertion with rich detail. As a good journalist, Applebaum remains consistently respectful of the people she meets. Only once does she cross the line and judges, but to pity an ignorant anti-Semite can be forgiven (Applebaum is Jewish).

As she travels from the Russian Kaliningrad to Lithuania to Belarus and down to Odessa, Ukraine, she first organizes her journey by the peoples inhabiting the lands she crosses, then by cities, towns, and villages she passes through. Thus in Part One she visits Germans, in Part Two Poles and Lithuanians, and finally in Part Three Russians, Belarusians, and Ukrainians. But even as she describes well a municipality in each chapter, nations and nationalism matter more than the place and characteristics of each place matter only inasmuch as they relate to the shifting national borders. Granted, on the backdrop of nationalisms bubbling up after the fall of Communism, the impulse to see the region through the national lens seems understandable. Too, in 1994 the concept of place identity wasn’t a force it is today. But writing so little about the impact of villages and cities themselves, as places, on the people Applebaum meets struck me as a missed opportunity.

"Between East and West" was the rare book I read word for word (I would have even read the index, had there been one). But I almost abandoned it when, after leaving Mukachevo and passing, roughly south-eastbound, through Khust, Applebaum miraculously finds herself near Miková, Andy Warhol’s parents’ village in Eastern Slovakia which is some 230 kilometers (144 miles) to the northwest. The episode is only a page of text, but the magnitude of the error left a bitter aftertaste of a misplaced gimmick.

Save for the one instance of teleportation, "Between East and West" is the kind of book I want (and am planning) to write: combination travelogue, historic geography, and literary reportage focusing on Central/Eastern Europe. Rather than being dated, it reveals a striking portrait of a turbulent time in the region.

Rich in surprising encounters and vivid characters, "Between East and West" brilliantly illuminates the soul of the borderlands and the shaping power of the past.