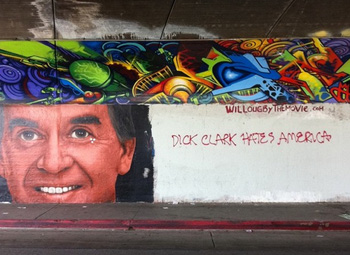 Dick Clark passed away last week and the news left me unmoved. But as the narrative of Clark’s cultural impact unfolded over the next few days, once again I found myself scrambling on the acculturation treadmill.

The NPR news segment identified Dick Clark as the TV host of "American Bandstand" and the New Year’s Eve countdown at Times Square; later I learned he had been the first American "television personality." Having seen the music show, which ran from 1957 to 1987, precisely zero times and the "New Year’s Rockin’ Eve" only for a few inebriated seconds, years ago, I could not picture his face or conjure his body of work.

When American celebrities like Whitney Houston die, their global brand assures familiarity for most immigrants. The likes of Etta James or Johnny Otis

passed through my cultural radar since I arrived stateside, and I registered the news of their passing with some dismay.

But there are dead celebrities that everyone but you seems to mourn. Every month this year, I’ve experienced the death of a celebrity who was completely unknown to me until I learned of their death: Mike Wallace, Andrew Breitbart, and Davy Jones all seemed to have moved and shaken and stirred, in their time and their way. To feel no nostalgia, no loss other than in a cultural discourse I am not part of—it’s unsettling.

Every country has its ‘domestic’ celebrities, whose fame or importance keeps within its geographic, linguistic, or cultural limits. For example:

When I had told my wife Lindsay about these Slovak cultural icons, she drew a blank face that mirrored mine as I listened to Lynn Neary announce Dick Clark’s death. Only Oceán rang a bell the same way New Year’s Eve on Times Square would for me.

Now every time I peek at my Facebook Wall or turn on the news during my commute, I half-expect to experience that moment of confusion that comes from not having a clue. By virtue of population mass, length and richness of pop and political culture, and the speed with which new personalities enter the discourse, America continues to produce a huge number of celebrities. I’m having a hard time keeping up with pop culture today. More so, particularly the era before 1990 when Central/Eastern Europe got flooded by everything West is a vast expanse of unknown celebrities. In fact, the longer I’m in the U.S., the more I see that the expanse encompasses the entire period before I got here in 2003.

The onus, of course, is on me as the immigrant. Deal with it, I tell myself. My assets as I do so include:

Thus equipped, the unknown celebrity becomes an acculturation treadmill buddy. Hey Dick, thanks for the music.

Anyone know why or how Dick Clark hated America? Was it the hair?