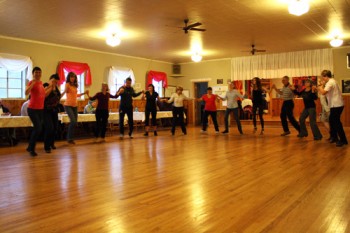 Yesterday, May 24th, was Saints Cyril and Methodius Day, an important holiday for Bulgarians and Macedonians, commemorating the creation of the Cyrillic alphabet and generally their culture.* Members of the Podkrepa Bulgarian and Macedonian Association celebrated the big holiday at the Podkrepa Hall in North Portland with a potluck and folk-dancing party.

I learned about the event from the Northwest Balkan Events Google Group, where Kathy Fors, a member of both Kafana Klub and Krebsic Orkestar, posted the announcement. I showed up right at 7, and the Bulgarians made me feel right at home. Offers of home-made food (the flan and almond cake were to die for) and home-made pinot noir reminded me of my family’s hospitality. As a certified klutz, I was sorry to decline invitations to dance, but I was thrilled to find another pocket of Central/Eastern European culture in my town. Besides, anyone who calls Stalin a motherfucker is my kind of people.

Throughout the evening, I chatted with several members of Portland’s Bulgarian community and with Americans who came for the dancing. Two passersby, who had heard the music through the Hall’s open door and walked in to see what was happening, became willing students of Bulgarian history 101. A few themes emerged from the conversations: 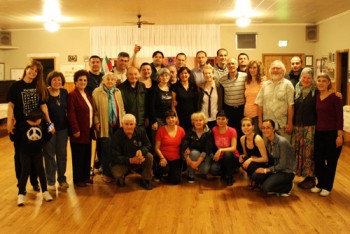 They came, they danced, they ate, they celebrated St. Kyril and Methody. Podkrepa Hall, 5/24/2012

The original purpose of Podkrepa, which means “support” and which was founded in 1939, was to “help Bulgarians and Macedonians in Portland to adjust to the U.S.” In “Homesickness”

Matt describes how such fraternal and mutual benefit organizations mushroomed following the turn-of-the-century immigration from Central/Eastern Europe and elsewhere.

In later years, Podkrepa’s purpose changed to “uniting Bulgarians, Macedonians, American Bulgarians, and American Macedonians to promote Bulgarian and Macedonian educational and cultural activities, gatherings, and celebrations.” The holiday celebration dance capped the season (they take place every other Thursday from October to May). As the weather gets warm, the Hall, with its lack of air-conditioning becomes hostile to physical activity. Podkrepa’s other activities include language classes for adults and children, music classes for kids, and cooking classes. Eligible to apply for membership are Bulgarians and Macedonians who were born in either country, lived there, or are descendants as well as spouses thereof. Conducive to the communal spirit, rather than individual, membership is family-based.