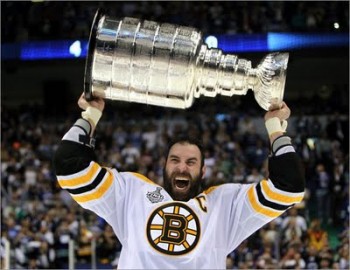 The Boston Bruins captain Zdeno Chara hoists the Stanley Cup in 2011. A bittersweet moment, when team loyalty (the defeated Vancouver Canucks) clashed with the national one (Chara is Slovak). Image courtesy of Mindpuck.

The Stanley Cup final started last night with the New Jersey Devils hosting the Los Angeles Kings. Unlike last year, when Zdeno Chára became the first Slovak captain of an NHL team to win the Cup, no Slovaks will be hoisting the trophy this year. But 6 players from Central European countries are playing in the Final.

This, of course, is an exercise in American Robotnik-ness, if there is such a thing. In the NHL, team, rather than national, loyalties command attention. With both ‘my’ teams (Vancouver Canucks in the West and Philadelphia Flyers in the East) having been eliminated in earlier rounds, by the two respective finalists no less, the appeal of the Final is pretty low for me. But whether I’ll root for these six or not, Central Europe wins.

Most players on the Kings roster are American and Canadian. The one player from Central Europe anchors the team’s core and kicks ass.