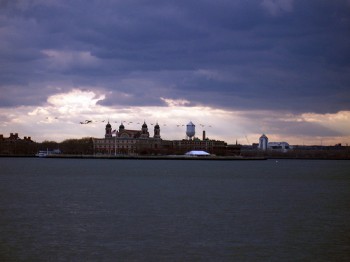 In “Homesickness: An American History”

Susan Matt tackles the development of the emotion in the United States. As a nation of immigrants, America has abundant experience with homesickness. Chapter 5 titled “Immigrants and the Dream of Return” focuses specifically on the period between 1871 and 1920, when some 20 million immigrants journeyed to America, and has the most to say about the immigrant experience with homesickness, both then and today.

Clinging to Dreams of Return

New, faster and cheaper transportation technology in the late 19th and early 20th century enabled not only the shrinkage of distance and speedy migrations but also a sense that the stay in the New World would be temporary. Success would enable these migrants to return home and improve their families’ station. Hence they “clung to dreams of return,” which in turn hampered assimilation.

Many immigrants did, indeed, return home due to homesickness. Some even made repeated trips. Close to half of the immigrants returned home permanently. Seventeen to 27 percent of Austro-Hungarians, 20% of Lithuanians, 30% of Poles, and 20-37 percent of Slovaks returned. Those that did return built bigger and better houses for their families as “payoff for the homesickness that so many had endured.”

Staying for a Better Life

A lot of immigrants wanted to but could not return, blaming not the economy but their own personal failure for being unable to come home empty-handed, or, rather, empty-pocketed. Others stayed in recognition of the better opportunities the U.S. offered. Matt speculates,

Those immigrants who stayed and flourished in the United States probably felt a jumble of emotions: pride at their success, guilt at their distance from home, and their greater prosperity.

Separation from family was the toughest challenge immigrants experienced, particularly during holidays. Many came alone hoping to bring families later, others brought their wives with them, causing the women to resent the lack of control over their lives and, consequently, a more intense kind of homesickness.

Amid the industrializing world of America, immigrants also missed the beauty of their homelands or the structures of their houses, and generally bemoaned the gap between myth and reality in America.

A major way immigrants dealt with their uprooting was moving in proximity of their compatriots. Ethnic groceries, fraternal organizations, clubs, and newspapers serves as some of the main social institutions helping to “maintain a bond with past places and selves” and reproduce “much of the social life of their old communities.” This was the period when Little Odessas, Polonias, or Bohemian Quarters formed.

These ethnic enclaves helped homesick immigrants feel more at home, although for many they never quite replaced what had been left behind.