Central Europe came to Portland, Oregon, last week. In the span of five days, from Friday, April 27th, to Tuesday, May Day, I experienced at least 7 Central European countries and Russia without leaving the East Side of town. Who said there’s only one America? 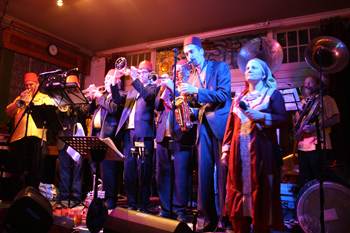 The Krebsic Orkestar is a 14-piece local brass band that plays about a gig a month at various venues around town. I don’t know much more about The Krebsic Orkestar,* other than it is the brainchild of Alex Krebs, who is a friend’s tango teacher and leader of the Alex Krebs Tango Quartet.

Alerted by a Facebook update, I caught them at the space adjacent to Mississippi Pizza for a second time this year. Fewer people than the first time, back in January, enjoyed a slightly different show: Maria Noel sang several songs, decked out in a traditional costume. Her rendition of “Imam jednu želju” (I Have One Wish) was positively heart-wrenching. Circle dancing ensued, foreshadowing the Central/Eastern European’s back bookend. 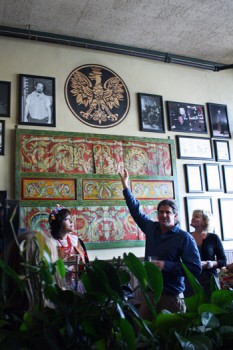 I’d heard about Chervona‘s April 28 gig at the White Eagle Saloon on Facebook weeks before, but only that day did I realize their show was a part of the “Crown the Eagle Festival: A Polish Heritage Celebration.”

The White Eagle Saloon is part of the McMenamins chain of pubs, most of which are located in historic buildings. The White Eagle Saloon was founded in 1905 by Polish immigrants, who settled in the Portland’s Albina neighborhood, and hosted meetings of the Polish community until the completion of the Polish Hall up Interstate Avenue. After McMenamins acquired the building, their in-house artist Maria Yoder painted the Polish White Eagle by the entrance, adding yin-and-yang signs in the wings but omitting the crown. This year McMenamins finally recognized and decided to fix the error of their ways (the Polish Communist Party used the national symbol crownless). The Polish Heritage Celebration revolved around the painting of the crown on White Eagle’s eagle.

I went to the event twice. In the afternoon, I attended a presentation about the history of White Eagle Saloon. McMenamins historian Tim Hills (yes, the company has its own historian!) showed slides of old photos of the neighborhood, the building, and various documents of Polish immigrant organizations that met there, all on the backdrop of early 20th century history, a plate of meat pierogi, and McMenamins special Orzel Bialy Baltic Porter.

Having seen Chervona up close, in the evening I watched Chervona from afar. Given Poland’s history, hearing Russian at a Polish festival was puzzling and made sense at the same time. Led by a St. Petersburg native, Chervona billed the show as an Eastern European Carnival.

I learned about the Ahoj PDX Ning Group from my sister-in-law who had struck a conversation during her cashier shift at the Food Front Cooperative Grocery with a customer who turned out to be Slovak. Exclusively in the language of its users, Ahoj PDX is a hub of Czech/Slovak activity in town. “The Pub” meetup takes place every first Tuesday of the month at McTarnahan’s Taproom in far Northwest Portland.

Having not met a single Slovak and only one Czech resident here in Portland, I was a little nervous about showing up to chat with a bunch of strangers from the same imagined community. But beer (Full Bloom Lager) and the bonds of language, origin, and immigrant experience eased the introduction. I met Milan from my home town; Laco who is a gold dredger about to leave for Nome, Alaska; Karel who owns the awesome Czech food cart Tábor; Jana (?) who is an accountant for a hydroponics shop; and finally Marika who not only gave me great tips on teaching Slovak but also turned out to be the person who, inspired by the SK sticker on my car’s rear bumper, years ago stuck a piece of paper with her phone number behind my windshield—following a single phone call, we’d lost touch.

For an evening, it was as though Czechoslovakia still existed.

At the Krebsic Orkestar show, an English guy told me and Maria added details about the regular (1st Tuesday of the month) Kafana Klub performance at Alberta’s Al Forno Ferruzza Pizza.** Right after the Czech/Slovak experience, acoustic Bulgarian and Macedonian music was quite a jump, as was the transition from the sedentary pursuit of beer and conversation to circle dancing, which mysteriously took over the dance floor. Vague flashes of Hobbiton clashed with visions of a medieval hall beneath the Balkan beats as Brent Geary shredded the violin and kemenche (Karadeniz Kemencesi).

Though I wished for more amplification and room on the floor (circle dancers!), the music left me enchanted and eager to return next month. What a problem to have: if only The Pub wasn’t happening at the same time!

* Yet. I’m interviewing Alex Krebs soon.
** What is it with pizzerias and Balkan music?!