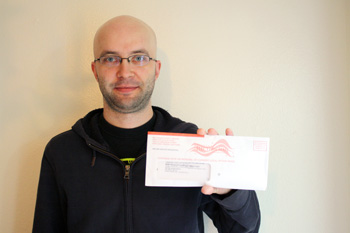 This weekend I’ll cast my first vote in an American election—the “May 15, 2012 Primary Election.”* It’s a big deal.

Everyone remembers pivotal moments of their life: Slovaks where they were when Czechoslovakia ceased to exist and independent Slovakia came into existence; (East) Germans when the Wall came down; Americans where they were when the planes hit the Towers. I remember the exact moment I decided to apply for U.S. citizenship and be a part of this nation: on the evening of November 4th, 2008, as I watched Barack Obama step onto a stage to give his election victory speech. I became citizen just over a year ago, on May 4th, 2012.

Oh What Fun It Is to Vote

“It’s too bad that you’re not voting in a more fun election—that it has to be a primary,” said Lindsay, summarizing how Americans feel about non-presidential elections. The highest turnout in a U.S. federal election in my lifetime was in 2008: about 57% of all eligible voters and 63% of registered ones (figures vary across sources), which is meager by European standards. But in 2010, the federal election attracted only 37.8% of registered voters. Primary elections tend to garner even lower turnout numbers, though Oregon’s vote by mail system appears more conducive to turnout: 70% in 2006, 86% in 2004. Statewide primary elections are on par with the federal non-presidential election. No wonder a huge part of every election are get-out-the-vote efforts.

Reasons for low electoral turnout in the U.S. vary and include

These factors affect me to a degree. I’ve always been interested in politics despite my low trust in public institutions and politicians anywhere. I considered having to register a hassle. American campaigns fascinate me, albeit mostly thanks to their ridiculousness. I am definitely not tired of voting and a long ballot is an opportunity to explore what’s going on. 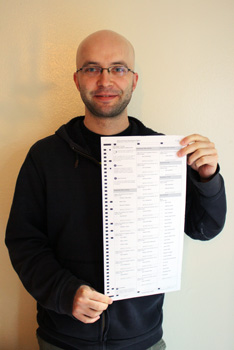 The ballot. It is big.

I have also lived in a system that did not allow for free electoral choice; I am painfully aware of places where people go to prison or die fighting for the right to vote freely—alas, right now in Syria. Abstaining from voting feels disrespectful to those who cannot vote and to those who helped secure the right itself (I do feel awful for missing deadlines for Slovakia’s recent parliamentary election). Not to mention that, as they say, if you don’t care for politics, it will take care of you.

Local affairs may not be the hot stuff of the federal presidency, but they affect a denizen’s life more directly and immediately. I use the library several times a week—for books and wi-fi. It does matter who is the Portland mayor or City Councilor or state Supreme Court judge.

I look forward to casting my first ballot in the U.S. Above all, my vote effectively ends my civic limbo.

* Oregon has vote by mail so, it being too late then to mail it in, I’ll be able to drop off my ballot before the Tuesday 8 p.m. deadline.