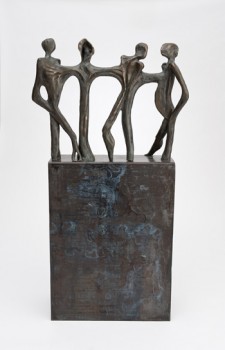 I discovered the Prague-born artist and Portland, Oregon, resident Olinka Broadfoot about two years ago at a new gallery in SE Portland. Being an artistically-inclined nerd, I loved her circuit board series. Then two weeks ago, that now-defunct gallery’s owner Kelley Roy, who now runs ADX, told me Olinka’s new studio is in the Ford Building, where I was heading for the First Friday Open House. I missed Olinka at the studio but left behind my American Robotnik business card, and we arranged a conversation last week. We chatted in English.

American Robotnik: When and how did you come to the United States?

Olinka Broadfoot: I left Prague with my parents in 1948, when I was four. My father was Jewish and my mother Catholic. My father was interred in Teresienstadt, a concentration camp, late in the war and so he survived. After the war, my father believed everything was going to go back to normal. But my mother insisted on leaving. Forty-eight hours after our departure, the communists took over.

We went to Argentina, the first country to accept our visa application. We wanted to go to the U.S., and a year after we arrived in Buenos Aires the American consulate wrote letters telling us we could go. But we had no money. Finally, in 1956 we received a last letter in which we were told that if we didn’t immigrate that year neither my parents nor their children would ever be allowed to do so. We arrived in Bronx, New York. It was awful, I cried myself to sleep for a year. Then I got used to it. I became U.S. citizen in 1962 as a 16-year  old girl.

I went to the college in Utah, where I met my late husband. We came to Oregon in 1971, we built a house near Eugene. After he passed away, I lived in a lot of places—Florida, Ohio, New York, the Czech Republic…

American Robotnik: You’re currently coordinating the Art Making Abroad program, through which you teach people sculpting skills and techniques in the Czech Republic. When did you first go back to the country of your birth?

Olinka Broadfoot: I went back in 1995. I’m the only one from my family to go back, actually. I went for personal reasons, not because I was looking for home. I discovered that in the Czech Republic, I no longer existed because I had become a citizen of the USA after 1962. I did get my Czech citizenship back eventually.

A writer acquaintance gave me the name of an elderly couple in Malá Strana. I paid them for room and board, and they soon insisted I stay for lunch, then for dinner. They had no children, they kind of adopted me as a daughter they never had. It felt as though I fell back into the wound.

Back in Oregon, I had felt very connected to nature and didn’t like people very much. As I wandered around Prague I realized it’s not much different from walking around forests here. The stones spoke to me, I was impressed by what humanity had wrought. In Prague it was easier to find a sculpture than a phone booth. I felt I became human, found the community of the human race.

One other thing that occurred to me on my trips to the Czech Republic was that I didn’t have a home, not after I left the house my husband and I had built. It bothered me until I visited Stod, a small town southwest from Pilsen. There I realized I was home both there and here in Portland, where I moved in 201o. I’m home in two places.

American Robotnik: How does being home in two countries influence your art today?

Olinka Broadfoot: I ship finished components or sculptures to myself from CZ to Portland and use them here. I don’t have to do it, but that seems to be what I am doing. The best thing about going back to Prague was that I was given the opportunity to just create what was in me to create. Because the Tondach factory has become my patron there are no constraints on me to produce work that will sell. If it sells, great, but if I made art purely for commercial reasons it would feel like I sold my soul. Every artist has to make that choice for themselves. I have been incredibly lucky and I am grateful for that.

American Robotnik: Do you consider yourself an immigrant? Czech? 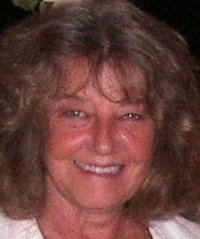 Olinka Broadfoot: I guess I would have to consider myself a Czech-American, but I don’t think about that very much. What absolutely blew me away on that first trip to Prague in 1995 was that everyone spoke Czech. The only place I had spoken Czech was at home, with my parents. In Prague, on the metro or on the street, I felt all the people were my family.

Do you know Werich and Voskovec? I believe it was Voskovec who said, “Language is home.” If that is true then I am an American, since English is easier for me to speak and write in than Czech.

I no longer consider myself an immigrant the same way you do. All my life I had always felt on the outside of things. I thought I was different from other people. I was wrong, I’m not.  I found my connection to history and humanity in the Czech Republic and brought it ‘home’ with me to Oregon.

13 Responses to “Home in Two Places: An Interview with Olinka Broadfoot”