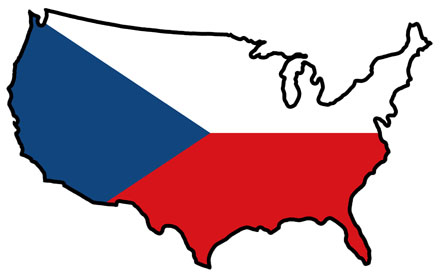 Two days remain to experience Czech cuisine at a brick-and-mortar restaurant here in Portland, Oregon. For three weeks until June 24, Karel and Monika from the Tábor Authentic Czech Eatery food cart will have served their home specialties at Enzo’s Caffe Italiano on NE Alberta Street while Enzo vacations in Italy.

Not only is this “unique and trailblazing collaboration” an excellent instance of utilizing spare business capacity, the narrative on the reverse of the menu claims it’s the first instance in town of a collaboration between food carts and restaurants.*

The menu itself is brief but representative of Czech cuisine, containing staples like dumplings, a “surplus of pork and beef,” potatoes, “uniquely prepared cabbage,” and various cream-based sauces. Both vepřo-knedlo-zelo (Roast Pork with Spaetzle and Sauerkraut) I had and svíčková (Marinated Beef Sirloin) Lindsay ordered were just like, if not better, those in Prague, especially since we got to wash them down with draft Pilsner Urquell. The menu also includes potato pancakes, mushroom soup, goulash, and fried cheese. We regretted to be too full for strudel. One thing you won’t find on the menu is the Schnitzelwich, which Tábor is best known for around Portland.

What’s more, though we’d never stepped foot in Enzo’s, we felt at home. First, our server turned out to be Stepan, whom we met at the fundraiser‘s for Geisslers Hoefcomedianten’s U.S. tour. Later, I got to chat with Karel and Monika, whom I’d met at the Hospoda meetup of the Ahoj PDX Czech/Slovak group in May. At another table, I ran into Barbara, the owner of Bohemian Gourmet Food, whose little son ran around the place saying hi to everyone. It felt as though Tábor the restaurant had been there for a long time and we were just another group of regulars.

Karel and Monika’s chef statement sheds some light on why the Enzo’s-Tábor collaboration turned out so well:

[T]he way the food is prepared for you is very similar to what you’d find at Enzo’s at any other time. Just like Enzo, Tábor’s Karel Vitek is a self-taught cook. He too was watching [sic] his mother and grandfather cook up a storm every day, and his idea about food is the same as Enzo’s—it should taste the same it did at home. Both Karel and Enzo stay away from “fusion,” they cook traditional foods of their childhood, and they don’t make a big fuss about it.”

Karel and Monika may or may not decide to take the leap and open Portland’s first Czech restaurant. If/when they do, I’ll share the good news.

* The relationship between food carts and restaurants has been less than amicable. Read more here and here (end of article), and here.