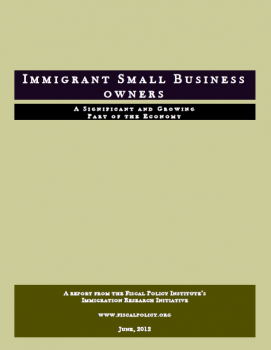 Immigrants made up 30 percent of recent small business growth.

Interestingly, there are more small business owners from Mexico than from anywhere else—12 percent of all immigrant small-business owners. Immigrant businessmen from India, Korea, Cuba, China, and Vietnam follow. Of the Central/Eastern European countries, Poland leads at 2%, followed by “other USSR/Russia,” Ukraine, and Romania at 1% each.

Moreover, immigrants from the Middle East, Asia, and Southern Europe are disproportionately inclined (as opposed to their share in the overall immigration) to be business owners, led by immigrants from Greece (16%) and Israel/Palestine (13%), trailed by Syria, Iran, Lebanon, Jordan, Italy, Korea, South Africa, Ireland, Iraq, Pakistan, and Turkey. Of the Central/Eastern European countries, Poland and Romania rank mid-pack at 6% each and “other USSR/Russia” and Ukraine at 4% each. This may have to do with history: the suppression of private enterprise under state socialism eradicated the ‘business gene’ in populations that tended to be peasants or industry workers in prior periods. Greeks, Jews, Arabs, and Koreans, by contrast, boast a rich history of entrepreneurship in their countries and around the world.

The longer you’re in the U.S., the more likely you are to own a business.

As much as Central European immigrants fall under these conclusions, the region’s share in the small-business statistics is fairly small. This has to do as much with history as with statistics—Central Europeans comprise only 3% of all foreign-born and only 0.5% of all population in the United States. Strength is in numbers and Central European ones are low.