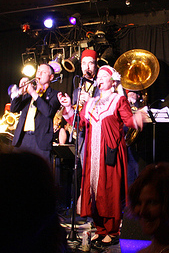 Maria Noel is a singer with two of Portland’s Balkan bands: Krebsic Orkestar and Kafana Klub. As I explore what compels natural-born Americans play foreign, particularly Balkan, music, I was curious to learn more about Maria’s experience. She chatted with me on a hot July afternoon.

American Robotnik: How did you get into Balkan music?

Maria Noel: I’ve always had an interest in folk music but for a long time I lacked focus. I guess I just needed to meet the right people. In around 1993 I met Dennis Godfrey through a mutual friend in the pagan movement. He and his wife played Bulgarian music in an acoustic band. I really liked the sound of the gadulka. Three years later a belly dancing teacher of mine brought in a drummer from her band to teach us rhythms and he got us to drum on the floor. I bought one of the drums and joined drum circles at pagan events.

Then Dennis and some klezmer musician friends of his started a jam session in an Irish pub here in town. They called it ‘Everything but Irish Music Night,’ and they mostly played Balkan and klezmer stuff. I’d sit and listen and drum on the table, and Dennis taught me some of the odd rhythms. Next thing I know, another musician, Al Murray started pushing a doumbek my way, and the following week I picked it up and started playing.

A week later they closed down the Irish pub. I thought, was it me? [Laughs.] For a year we were at the Lucky Lab on SE Hawthorne, other musicians joined us, then left, and we started focusing on Balkan music. Out of that came the band Kafana Klub in early 2000’s.

In about 1997 I got involved in the balkanalia! music and dance camp, I joined the team in its second year.  That’s where I started taking singing workshops. Then in 1999 I started going to a camp at Mendocino Woodlands, run by East European Folklife Center. Talk about total immersion! The camps are all about music: learning how to dance, sing, play instruments as if you’re from the Balkans

American Robotnik: What draws you to Balkan music?

Maria Noel: It’s hard to explain in a rational way. There’s a flavor to Balkan music, special musical ornaments like trills. You have a melody and you can play it but it doesn’t sound right until you attach the ornaments. And the ornaments come from the feeling. So it’s very emotional. I feel like I lived in the Balkans in a past life. There’s a familiarity that I can localize. I feel like I’m familiar with Balkan music as a whole, especially with Bulgarian music where I’ve been able to feel like I’m the most convincing. I’ve actually had Bulgarians come up to me after I sang and speak Bulgarian to me.

At camp teachers come from various Balkan regions, and you watch how they form vowels, how they form facial muscles, where sounds are coming from—the vocal chords, the throat, or are they nasal…

I’ve only been there once in this life. Two years ago I traveled to Macedonia and Bulgaria. In Macedonia I spent 10 days at the Macedonian Pearl Festival, which is similar to our camps in terms of immersion. Then I went to Bulgaria for a week to the National Fair of Bulgarian Folklore Art in Koprivshtitza, which only takes place every five years. The trip was an amazing experience. I bought a kaval flute and I’m planning to teach myself how to play in the winter, when I’m not so busy. I’m also thinking about learning Bulgarian.

American Robotnik: How did you connect with Krebsic Orkestar?

Maria Noel: Through Kathy Fors who is a Kafana Klub member. At some point Alex [Krebs] was considering adding a singer again, someone with a bigger voice. Where Kafana Klub plays a wider range of music, from Bulgaria, Macedonia, Romania, we have a Polish and a Serbian and an Armenian song, I’ve enjoyed the type of songs Krebsic Orkestar introduced me to.

There’s such a range of emotion in the songs. As a Westerner raised on crooners, I feel like I can connect to them. I’m a software developer so it’s a great outlet for me. The music balances me out.

American Robotnik: A mainstay at both Krebsic Orkestar and Kafana Klub live shows here in Portland, Oregon, are line dancers. How do you relate to dance?

Maria Noel: All folk dancers love to move their feet. There’s something wonderful about Balkan dancing: holding hands with everybody, sharing the energy of the line that sometimes get so long or curls so much you can’t see the beginning or the end. It’s a village feeling. A lot of the music is very old, so it’s as if you get to get back to your roots. It’s from the heart.