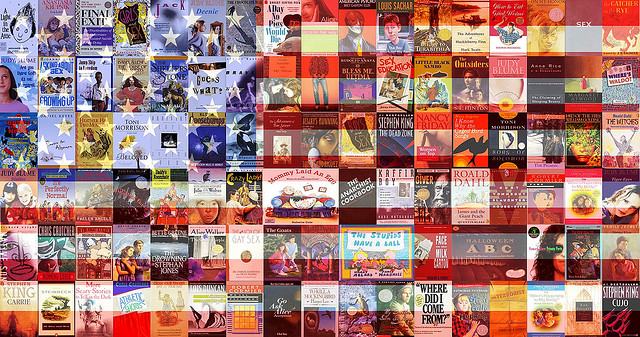 It’s middle of the Banned Books Week, “the national book community’s annual celebration of the freedom to read.” Throughout the country, “[h]undreds of libraries and bookstores draw attention to the problem of censorship by mounting displays of challenged books and hosting a variety of events.”

Banned Books Week highlights the value of free and open access to information. Banned Books Week brings together the entire book community—librarians, booksellers, publishers, journalists, teachers, and readers of all types—in shared support of the freedom to seek and to express ideas, even those some consider unorthodox or unpopular. —American Library Association

Banned Books Week was launched in 1982 in response to a sudden surge in the number of challenges to books in schools, bookstores and libraries. Hundreds of books have been either removed or challenged in schools and libraries in the United States every year. More than 11,300 books have been challenged since 1982. According to the American Library Association, there were 326 challenges reported to the Office of Intellectual Freedom in 2011, and many more go unreported. —BannedBooksWeek.org

Hearing about Banned Books Week, now in its 30th year, for the first time, Central Europeans possessing a memory of censorship under socialism may be excused for wondering, “What the…?” How can books be banned in the country that bills itself as the leader of the free world, the beacon of freedom, the bastion of the right to free speech?

A closer reading of the above description and other content at BannedBooksWeek.org and ALA.org reveals several differences between book bans in the U.S. and under socialism.

I’m headed to the library, what about you?

* I recently read about letters that writers and other intellectuals would address in the 1980’s to Communist Party censors requesting they clearly define the limits on what can or cannot be published. The writers were just looking out for themselves: an article could pass a censor one day and land you in jail the next.