Just when you thought September was a busy month for Central European events comes a packed October. Enjoy these wonderful events! Event copy and images are from the local media and event organizers. As usual, the list will be updated as I learn of additional events. 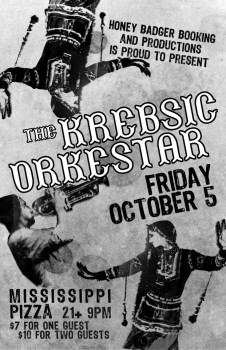 The Greek Festival remains a wonderful opportunity for us to share annually with over 15,000 guests from the Portland Metropolitan area our beautiful Greek Orthodox faith, our cherished cultural traditions, food, music, and dance. The event also features cooking demonstrations, imported crafts and gifts from Greece, a deli with gourmet imports, a children’s corner, a raffle, and your favorite Greek fare.

One of Bulgaria’s premier wedding bands has reunited after many years,recording a CD of traditional Bulgarian dance music and planning another U.S. tour scheduled for Fall 2012. This multi-talented group of musicians from Thrace, in southern Bulgaria, played together for nearly 20 years until two key members emigrated to the U.S. in 1995. Kabile was formed in 1978 and became one of the most popular bands in Thrace. Based in the city of Yambol, the group took its name from the village of Kabile, where they performed one of their earliest gigs. The group specialized in performing native music on traditional village instruments.

Bulgarian transplant DJ Joro-Boro is a special guest at ATLAS Dance Party, Holocene’s longest-running dance party, inaugurated in November of 2003 and still going hard. Hosted six times a year byresident DJs Anjali, E3 and The Incredible Kid, ATLAS is a one-of-a-kind post-national bass party that unleashes dancefloor mayhem from across the globe. Joro-Boro plays and promotes etnoteck, glitch-folk and post-national bass – the dirty local side of globalization force-fed back into a party without borders detonating the conglomerated mono-culture.