The Balkans and Beyond: Krebsic Orkestar with Moh Alileche and MWE, 11/15 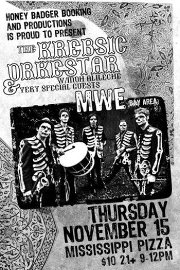 A Very Special evening of Eastern Music: the big Balkan brass of Krebsic Orkestar with Moh Alileche and very special guests from the Bay Area, MWE, supplying “a raw, high-energy mix of Turkish and Middle Eastern traditional and original tunes straight into your soul.”

A documentary musical comedy with elements of kitchen-sink realist drama. Marija’s funeral was interrupted by a storm. Six years later her grave remains unadorned, so her granddaughter, filmmaker Suková, decides to give Marija the send-off she deserves. Suková and her two cousins (one portrayed by an actress) throw a wild dinner party, inviting Marija’s elderly neighbors. Dressed in flamboyant frills, the cousins revel in the memory of their grandmother, while the Czech synth-pop band Midi Lidi provides live entertainment.

Giurov has been a lead soloist of the Sofia Musical Theater. He has been called by followers the Bulgarian Bocelli, yet he has performed with the biggest names of the Serbian popfolk. His public has been presidents and company leaders in Bulgaria, Europe and Japan. During the last two years he has performed in full halls to Bulgarian-American societies and friends in more than 20 USA cities. “Zlaten Orfei” was awarded to Ivailo Giurov in 1996. Luciano Pavarotti has been his mentor. Most importantly, Ivailo Giurov not only perpetuates the notes of European musical treasures of all times, but he preserves the Bulgarian folk song in its purest sound and extreme complexity which sustains and perpetuates the beauty of diversity in the world. This will be the concert to bring an American friend so you show what Bulgarian musical culture is all about.

Come and join us dancing every other Thursday. We dance to recorded music and use the help of DVDs to learn Bulgarian folk dances. Everyone is welcome!