A nice plethora of Central European events this month. All information comes from event websites or organizers. 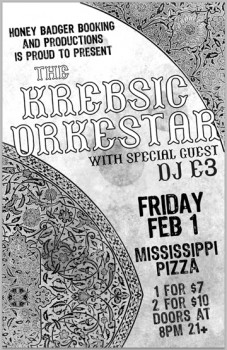 The 14-piece gypsy brass band the Krebsic Orkestar teams up with DJ E3 for a night of music, dancing, pizza, and beer! Ajde!!!

One of the most iconic filmmakers in the world, Czech animator Jan Švankmajer has been working for almost 50 years, profoundly influencing other artists ranging from Tim Burton and Terry Gilliam to the Brothers Quay. Celebrated for his singular fusion of stop-motion, clay, and puppet animation with live action, Švankmajer’s extraordinary, macabre tales are both darkly humorous and surreally bizarre flights of fancy inspired by literary sources as diverse as Lewis Carroll, Edgar Allan Poe, Goëthe, Franz Kafka, the Marquis de Sade, and Czech folk tales.

In the old magicians’ books, they say that if we wish to exorcise a demon or a ghost, then we have to give them a name … and I think that is precisely the method I use to get rid of my anxieties and fears. I give them a name in my films.—Jan Švankmajer

Special thanks to Irena Kovarova for organizing this touring retrospective and to additional support from the Czech Center New York.

Come and join us for a fun night of dancing and learning.

Come to see a staged reading of the play The Ugly One by a German contemporary playwright Marius von Mayenburg which Kateřina Bohadlová is directing with PSU students.

Opening of the exhibit by the leader of Portland’s Czech/Slovak network Ahoj PDX. With Shamani Compton and Kathy Krisinski. Exhibition lasts until 2/24.

As part of the First Thursday in the Pearl event, Fotoeffect Studio & Gallery is hosting a unique 3 person show – two photographers and one painter. Each artist explores the idea of image in their own way, showing us glimpses of personal moments, remote locations and even the stuff of dreams.

Madeleine Albright was U.S. Secretary of State from 1997 to 2001. Her distinguished public-service career also included positions on the National Security Council, as U.S. Ambassador to the United Nations, and on Capitol Hill. Taking readers from the capital city of Prague where Albright was born, to the bomb shelters of London where her family moved following the invasion in 1939, to the desolate prison ghetto of Terezín, Secretary Albright’s Prague Winter: A Personal Story of Remembrance and War, 1937-1948 recounts both her and her family’s experiences during the Nazi invasion of her native city. In addition to her family’s journey, Albright follows the story of millions of ordinary citizens throughout Europe who were ripped from familiar surroundings and forced into new roles as exile leaders, freedom fighters, resistance organizers, collaborators, victims, and killers. Weaving in the tangled history of her Czech homeland, Albright considers the effects of fear, trust, identity, and morality on decisions made by people from all walks of life during the war. Secretary Albright will be joined in conversation by Maria Wulff, president of the World Affairs Council of Oregon.

Ticket price includes admission and a copy of “Prague Winter: A Personal Story of Remembrance and War, 1937-1948”

. Books will be distributed at the event.

Featuring films from the Czech Republic, Hungary, Poland, and Romania as well as Russia and the Ukraine.