Who Is American Robotnik? 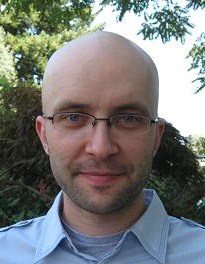 “Robotnik” [roh-boht-nyeek] means “worker” in Slovak. Ever my blue-collar father’s and white-collar mother’s son, I enjoy being productive—some would call it working—in my spare time. Incidentally, I worked a series of manual jobs for over a year after arriving stateside.

Where Is American Robotnik?

When and How Does It Happen?

American Robotnik publishes only when he has something to say. Drawing inspiration from the Slow Blog Manifesto, which declares, “It happens when it happens,” and which “speaks like it matters”, American Robotnik writes in his own time and aims for words that are timeless.

They say the United States is a place where you can be who you want to be: if no one knows you when you get here, you can be anyone you choose. As a newcomer, you are free to take the opportunity to reinvent yourself.

If you simply want to continue being who you were before you arrived, congratulations! But if all your life in the “old country” you felt compelled, even forced to become what others around you (your family, friends, society) expected you to be, the possibility of reinvention can be powerful.

In your quest to define the new you, you may reject the old one, in part or in its entirety. You imagine yourself as a blank canvas and start painting a new self.

But it takes you no time to realize just how much choice America offers—in everything. You soon may find the new freedom so overwhelming that you get stuck being no longer the old you and not yet the new you. Feeling ever outward bound and rudderless can be all the more frustrating if you’re searching not just for a sense of identity in the new reality, but for a basis for creative self-expression as well.

Luckily—this is by no means an inevitable development—the process of reinvention can lead to rediscovery. Events and places can conspire to make you see your old self anew and embrace it as it evolves into its different, and perhaps even better, iteration in the new country.

And when you come to agree with the old marketing adage, “If you can’t change it, promote it,” you begin to write about your experience.