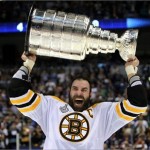 The Stanley Cup final started last night with the New Jersey Devils hosting the Los Angeles Kings. Unlike last year, when Zdeno Chára became the first Slovak captain of an NHL team to win the Cup, no Slovaks will be hoisting the trophy this year. But 6 players from Central European countries are playing in the Final. This, of course, is an exercise in American Robotnik-ness, if there is such a thing. In the NHL, team, rather than national, loyalties command attention. With both ‘my’ teams (Vancouver Canucks in […] Continue reading >