The people thrown into other cultures go through something of the anguish of the butterfly, whose body must disintegrate and reform more than once in its life cycle. —Rebecca Solnit, “The Blue of Distance II,” in: A Field Guide to Getting Lost

From Around the Web “Conservatives Are Driving Americans Away from Religion” by Claude S. Fischer, Boston Review, October 15, 2014 — Self-explanatory. “The Death of Adulthood in American Culture” by A.O. Scott, The New York Times Magazine, September 11, 2014 — “[I]n doing away with patriarchal authority, we have also, perhaps unwittingly, killed off all the grown-ups.” “9 Reasons We Should Abolish Tipping, Once And For All” by Hunter Stuart, Huffington Post, October 17, 2014 — A follow-up to my two-part post on tipping. “Think There’s a Lot of […] Continue reading >

Can one be a foreigner and happy? The foreigner intimates a new idea of happiness. Between flight and origin: a fragile limit, a provisory homeostasis… The strange happiness of the foreigner is to maintain this eternal flight or this perpetual transience. —Julia Kristeva

Memory is potent…for almost any immigrant. As you scramble to piece together your future in an unknown environment, you only have the past and its customs to guide you. But the past and its customs are increasingly murky and useless. Faced with an unknown future, we retreat to the past for its safety. An inability to assimilate to their new homes—to abandon memories, language, traditions is the charge most often lobbed at immigrant communities. For immigrants, solitude and the trap of memory are central conditions. If our memories are […] Continue reading >

The newcomers make themselves at home; they adapt themselves easily and gladly to the material environment, and make a moral environment of their own on that solid basis, ignoring or positively condemning the religion and culture of the elder Americans. Perhaps the elder Americans are assimilated in spirit to the new ones more readily that the new Americans to the old. I do not mean that any positively German, Italian, Jewish, or Irish ingredients are incorporated into American traditions: on the contrary, the more recent immigrants are quick—much quicker […] Continue reading >

Immigration, exile, being uprooted and made a pariah may be the most effective way yet devised to impress on an individual the arbitrary nature of his or her own existence. I knew something they didn’t, something hard to come by unless history gives you a good kick in the ass: how superfluous and insignificant in any grand scheme mere individuals are. And how pitiless are those who have no understanding that this could be their fate too. —Charles Simic, “Refugees”, in: Letters of Transit: Reflections on Exile, Identity, Language […] Continue reading >

[T]hese days we are wont to say not so much that all fiction is homesickness as that all homesickness is fiction—that home never was what it was cracked up to be, the haven of safety and affection we dream of and imagine. Instead, home is conceived of mostly as a conservative site of enclosure and closure, of narrow-mindedness, patriarchal attitudes, and dissemination of nationalism. And, indeed, the notion of “home” may have been, in recent times, peculiarly overcharged, as the concepts of “country” and “nation” have been superimposed on […] Continue reading >

[T]he potential rigidity of the exilic posture may inhere not so much in a fixation on the past as in habitual detachment from the present. [T]his posture, if maintained too long, allows people to conceive of themselves as perpetually Other, and therefore unimplicated in the mundane, compromised, conflict-ridden locality that they inhabit; it allows them to imagine the sources and causes of predicaments as located outside, in a hostile or oppressive environment, rather than within. —Eva Hoffman in “The New Nomads”, in: Letters of Transit: Reflections on Exile, Identity, […] Continue reading >

[O]ne certain outcome of exile is the creation of a bipolar personal world. Spatially, the world becomes riven into two parts, divided by an uncrossable barrier. Temporally, the past is all of a sudden on one side of a divide, the present on the other. —Eva Hoffman in “The New Nomads”, in: Letters of Transit: Reflections on Exile, Identity, Language and Loss, Andre Aciman, ed.

The old folk knew then they would not come to belong, not through their own experience nor through their offspring. The only adjustment they had been able to make to life in the United States had been one that involved the separateness of their group, one that increased their awareness of the differences between themselves and the rest of the society. In that adjustment they had always suffered from the consciousness they were strangers. The demand that they assimilate, that they surrender their separateness, condemned them always to be […] Continue reading >

Since [Eden], is there anyone who does not—in some way, on some level—feel that they are in exile? We feel ejected from our first homes and landscapes, from childhood, from our first family romance, from our authentic self. We feel there is an ideal sense of belonging, of community, of attunement with others and at-homeness with ourselves, that keeps eluding us. The tree of life is barred to us by a flaming sword, turning this way and that to confound us and make the task of approaching it harder. […] Continue reading >

From the RSS Feed “The Rise of Gay Marriage and the Decline of Straight Marriage: Where’s the Link?” by Derek Thompson, The Atlantic, April 4, 2013 “A ‘Whom Do You Hang With?’ Map of America” by Robert Krulwich, NPR Blogs, April 17, 2013 – “These are the first maps that are trying to paint us the way we actually are.” The Book Stack Andre Aciman, False Papers: Essays on Exile and Memory, New York: Picador, 2001 – BUY NOW Salman Akhtar, Immigration and Acculturation: Mourning, Adaptation, and the Next […] Continue reading > 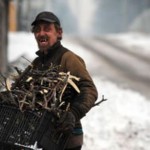 Rather than getting into where stereotypes come from* or how stereotyping operates, let me tackle the problem of dealing with negative stereotypes, since positive stereotypes are much less detrimental to optimal immigration experience. In addition, rather than just coping, which implies an internal, psychological process, let me examine how to combat negative stereotypes. Three basic strategies come to mind. Anti-stereotyping strategy #1: Ignore Ducks spread a waxy coating on their feathers during preening that ensures their underlayer remains dry at all times. Likewise, you the immigrant can build a […] Continue reading >

[T]he change was not confined to economic matters. The whole American universe was different. Strangers, the immigrants could not locate themselves; they had lost the polestar that gave them their bearings. They would not regain an awareness of direction until they could visualize themselves in their new context, see a picture of the world as it appeared from this perspective. At home their eyes had taken in the whole of life, had brought to their perceptions a clearly defined view of the universe. Here the frame narrowed down, seemed […] Continue reading >