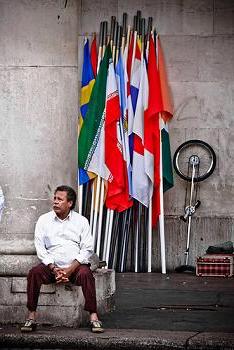 Positive psychology shows that the pride in your country correlates with well-being. “Research shows that feeling good about your country also makes you feel good about your own life,” establishes a recent Science Daily article that highlights new research showing the source of that patriotic pride makes a huge difference in the level of life satisfaction. Civic nationalism makes people happier than ethnic nationalism.

Whereas ethnic nationalism is based on ancestral, racial, or religious terms (or a combination thereof), civic nationalism springs from pride in a country’s laws and institutions. A study of some 41,000 people from 31 European countries demonstrates that

more national pride correlated with greater personal well-being. But the civic nationalists were on the whole happier, and even the proudest ethnic nationalists’ well-being barely surpassed that of people with the lowest level of civic pride.

It is unclear from any reports on the study why civic nationalists are happier than ethnic ones, except that the former starts from a higher level of satisfaction than the latter. Researchers Matthew Wright and Tim Reeskens also seem to ignore the possibility of people feeling both ethnic and national pride—I can be a proud ethnic Slovak but I can also be proud of Slovakia as a state.

A possible explanation from my own study of nationalism. Ethnic nationalism is exclusive: it sees the Other as a threat to the nation’s purity and continuity. It comes with siege mentality, a feeling of being threatened by outsiders, such as immigrants or non-believers. It, therefore, starts from a negative position. By contrast, civic nationalism is more inclusive because it bases belonging on the belief in ideas; your ethnicity (blood, religion, race) doesn’t matter as long as you subscribe to a given set of principles, such as a constitution.

In the Satisfaction with Life Index, 6 out of top 7 countries are European with strong traditions of both ethnic and civic nationalisms. Incidentally, they’re also predominantly Protestant or have a history of strong Protestantism. The United States ranks 23rd on the Index, behind 11 European countries.

The better-known Human Development Index, which, similar to the Satisfaction with Life Index takes into account education, health, and wealth, ranks the U.S. as 4th, behind Norway, Australia, and the Netherlands (again, Protestantism appears to correlate to a country’s ranking).

While ethnic or civic pride are clearly associated with individual well-being, other socioeconomic factors affect the outcome to a great degree. I’m also curious to know what’s behind America’s ranking high in one but not the other index, and how ethnic and civic pride evolve in immigrants, particularly to the United States.

For now, the question of causality remains: are civic nationalists happier than their ethnicity-minded compatriots because of their values and beliefs, or do their country’s prevailing laws and institutions make them happy and, consequently, proud because they work well for them?