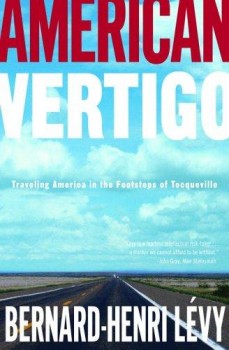 The title of Bertrand-Henri Lévy’s "American Vertigo: Traveling America in the Footsteps of de Tocqueville"

is both accurate and deceiving. Lévy’s prison tours are a thin pretext for his travels through the United States in 2004, an afterthought in the dizzy-inducing whirlwind of a trip.

Whereas Jean Beaudrillard spun, in "America," his account in terms of space (the desert), Lévy narrates the country as movement (the road). The result reflects the approach: Lévy breezes through the land in fragments and enumerations. Similar to any lengthy road trip, as soon as I settled into the book I found myself paying attention only intermittently, skipping passages, skimming through the snapshots of what could also easily have been bullet points. Lévy occasionally does venture into analysis, as when he discusses the Americans’ inclination to create history out of everything ("a country where everything ends up as a memorial"). But soon, he’s off to the next stop, and the thought is gone.

Similarly, Beaudrillard’s musings may have been over-philosophized, but that’s perhaps because he’s a superior, more original philosopher. When a list of observations becomes too long for Lévy to handle (cue the vertigo), he sweeps into a conclusion that sounds pre-conceived, as if he were superimposing on reality his idea of America as he knows it from movies and television. For Lévy the simulacrum comes first and when reality’s complexity intervenes, he resorts to the simplified version.

Worse, as he criss-crosses the country, on what Garrison Keillor named the "Freaks, Fatties, Fanatics & Faux Culture Excursion", Lévy carries with him an air of condescension. He tries to mask it with attempts at eloquence and what he passes for analysis, but he simply cannot shake it. Perhaps it’s because he visited the States in a presidential election year, when the country does become a circus of sorts. Or it’s because W was still President, and the French had only disdain for him and the Iraq war. Regardless of his motive, the quelle-horreur view of America’s collapse persists throughout.

As another afterthought, indignation seeping from the first 240 pages takes, in the concluding chapter "Reflections," a sharp U-turn. It turns out America’s paradoxes and contradictions make it a stronger, more resilient place than it appears to a casual traveler. Yes, the evidence presented spurs a curiously opposite conclusion.

Being a naturalized American, my irritation with the book never reached the heights of Keillor’s; my scorn reflects my European sensitivity. If learning how to do things entails also learning how not to do them, Lévy’s "American Vertigo" provides an excellent tool for every travel writer.

What does it mean to be an American, and what can America be today? Lévy investigates issues at the heart of our democracy: the special nature of American patriotism, the coexistence of freedom and religion (including the religion of baseball), the prison system, the "return of ideology" and the health of our political institutions, and much more. He revisits and updates Tocqueville’s most important beliefs, such as the dangers posed by "the tyranny of the majority," explores what Europe and America have to learn from each other, and interprets what he sees with a novelist’s eye and a philosopher’s depth. [B]ig themes emerge throughout, from the crucial choices America faces today to the underlying reality that, unlike the "Old World," America remains the fulfillment of the world’s desire to worship, earn, and live as one wishes–a place, despite all, where inclusion remains not just an ideal but an actual practice.