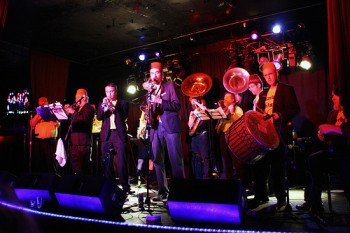 Alex Krebs is the founder of Krebsic Orkestar, a Portland, Oregon-based Balkan brass band, where he plays the saxophone. Dubbed by Oregon Music News as “Oregon’s tango king”, he teaches tango, fronts the Alex Krebs Tango Quartet, and in August he will back up on bandoneon “the Frank Sinatra of tango” Alberto Podestá at a festival in Baltimore. He has a double major in physics and music from Reed College. He shared with me his passion for Balkan brass music at his Tango Berretin studio in Southeast Portland.

American Robotnik: How did you get into Balkan brass music?

Alex Krebs: About 12 years ago I was in Nijmegen, The Netherlands, and at a tango dance the DJ played some Goran Bregovi? music. The music grabbed me and I sought out all his albums. Then I just kept looking for other brass music—Boban Markovi? Orkestar, Fanfare Ciocarlia, Ko?ani Orkestar…

Five years later I learned about the Gu?a Festival in Serbia and decided to go. From there I signed up for Amala School to learn to play Balkan brass saxophone…. I stayed with the teacher, who was this gypsy living in the middle of Serbia. I’d never had such an intense experience. My lips bled from playing, but he just said, ‘Play out of the side of your mouth.’

After I got back to Portland, I looked for musicians on Craigslist to form a Balkan brass band here. I told them, ‘If you’re in it for the money, you’re in the wrong band.’ Because over there they played and taught everything by ear, I did have to write down all the notes I could. But notation cannot capture everything, particularly some of the ornamentation. By 2006 I got enough of a repertoire and a hodgepodge of musicians—both amateurs and professionals—we could play shows. We’re not making money playing gigs, we just want to have a good time. All the band members say they’ve never played such physically demanding music, especially when it comes to breathing.

We’ve probably played every club in town, a Macy’s grand opening, we play weddings… The Dante’s show was our first there.

The whole story reminds me of how I got into tango. I heard Carlos Gardel on the radio and became fascinated with it. The same thing happened with Balkan brass. It lit a flame inside and it wasn’t enough to just listen to it, I had to somehow become it.

Alex Krebs: Loving it. I’m looking for ways to synthesize various areas of the genre. I’ve written some original compositions that I tried to camouflage in brass, and I cherry pick the repertoire to include stuff I like and that is accessible to non-Balkan people. Every song that I pick is with a person in mind who has never heard Balkan brass, so they can enjoy it. Line dancers like different meters, the Bosnian crowd likes the sevdahs, and we’ll throw those in, but we like to play the fast and loud stuff too. I want to stay within the genre. Over there they care about faster and louder. Bands aim to excite people, they’re meant for crowds having a good time, drinking, getting married, they aren’t meant for sit-down shows. We’re trying to keep the spirit of that. We play party music.

American Robotnik: At a January gig at Mississippi Pizza here in Portland you introduced your wife who is Bosnian. What’s her take on your passion for Balkan brass?

Alex Krebs: Her family came in the 1980’s. She loves the American idea, the structured way things work here. You can start with nothing and end up with everything. In Bosnia, personal connections and bribes are important. But she also likes their slower pace of life.

Daniela and I met through tango. Both she and her family were baffled by my being into Balkan brass. Argentines who would walk by the tango dance studio here on Southeast Foster would feel the same way, as would Americans walking into a swing club in Buenos Aires or Sarajevo.

American Robotnik: So what is it that drives your passion for Balkan brass music?

Alex Krebs: It resonates with me very strongly.

At the same time, when it’s not your culture, you study it more. Daniela knows English grammar better than I do, and my understanding of Spanish grammar is probably better than an average native speaker’s. It seems that on a technical level, foreigners try to assimilate the information better, they have the incentive to do better. The same goes for music.

I amassed as much Balkan music as possible, downloaded photos of people playing it, researched the music, listened to it over and over, I couldn’t get enough of it. A few years of listening later something happened, and I started playing the music and composing my own songs. I’m also interested in the history and culture of the Balkans, I’ve read up about it to understand what’s behind the music. Interacting with my in-laws is also instructive.

When I went to Serbia, it was a bizarre experience. The throwing of shot glasses in bars; the disciplines at Gu?a Olympics such as shooting apples suspended from wires or blowing up dynamite sticks; the lack of infrastructure… It’s the same thing that makes the culture interesting: party today because tomorrow may not exist. The party culture extends to live music.

Ultimately there’s a hole in everyone that needs to be filled. Though I was born and raised in California and Oregon, American culture has never resonated with me as much as other cultures. Before Balkan brass and even before tango, I tried Tuvan throat singing. I went there, to the geographic center of Asia, studied its physics in college. I was drawn to the monastic, scientific aspect of it. But then tango came along and took over.

Especially when you leave your culture there will be a hole there, whether you want it or not. That’s where homesickness and nostalgia come from. It’s a common feeling in the birth of a lot of music. Tango is all about it.

Tango and Balkan music and my wife and my kids fulfill me. Tango is sad and introverted, a sanctuary and an escape. Balkan brass is very extroverted. If I didn’t have it I would have to party more.